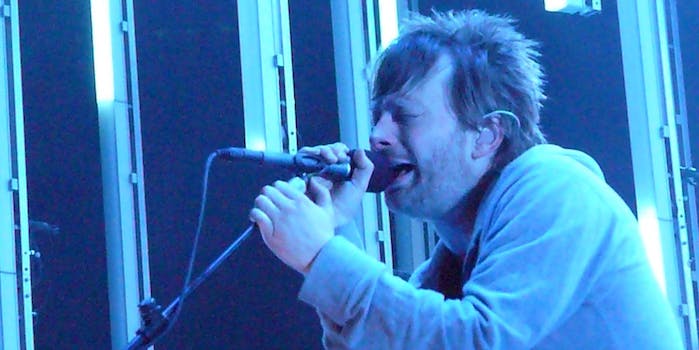 Being a Radiohead fan means living your life in a state of constant surprise and confusion. Notoriously press shy frontman Thom Yorke and his ragtag crew of virtuoso musicians appear even more perplexing and mysterious in the age of social media.

That was reaffirmed last weekend when cryptic flyers began appearing in the U.K. Then the band began deleting their social media presence with seemingly no explanation. For many, this was a clear sign that Radiohead was about to drop their ninth album.

Many legions of fans were unconvinced, however. Reddit user InsanityDefinition swore to eat a photo of Yorke if the band’s new album was released this week and recruited others to join in the effort. Lo and behold, Radiohead announced on Friday that it would digitally release a yet-to-be-named album on Sunday.

InsanityDefinition copped up to the error in judgement, detailing how they’d eat the photo on Reddit:

I will personally be printing off an image onto regular paper. The image will probably be from the new singles’ video because Thom looks like a stud in it. Can’t do a regular photo sheet as that may actually be very unpleasant to eat. I’ll probably rip the picture into small, small pieces and combine it with a couple of cups of a soda or some other beverage, as eating a half sheet of paper without anything else may actually prove detrimental to my health.

While this particular redditor is waiting until the new album’s release to go through with the bizarre meal, other fans have already bitten the bullet.

One Radiohead fan even consumed his photo with a bowl of cereal and milk. Truly, a breakfast of champions.

Here’s to eating your words. Literally.