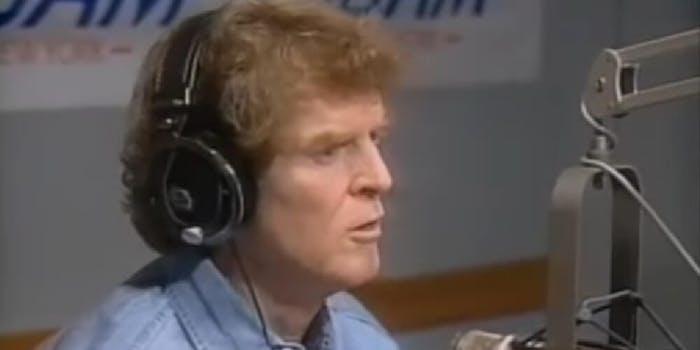 He died after being hospitalized on Christmas Eve in Texas.

Longtime radio host Don Imus died at the age of 79 after being hospitalized on Christmas Eve in Texas.

The radio personality was known for his show Imus In The Morning, which aired until last year. Imus was also the author of the book God’s Other Son, which was a best seller in 1994.

The radio star was known for racist remarks he made on his show. In 2007, news organizations like MSNBC and CBS removed his show from their stations after he called the women on Rutgers University women’s basketball team “jigaboos” and “nappy-headed hos.”

The conversation on Twitter is largely divided over the news of Imus’ death.

I’m sure there are people in his life who mourn his loss but I’m not one of them. pic.twitter.com/Vj7AYUJJMa

In his heyday Imus was the best interviewer—an epic talent. Many great on-air memories in his Astoria studios, and (sorry, haters) responsible for my 17-year radio career. “Don Imus, Legendary 'Imus in the Morning' Host, Dies at 79 https://t.co/H0YPhRrxtp

Don Imus was a racist and misogynist. He sexually harassed multiple women I know personally.

Was he a pioneer in his field? Sure. So was Roger Ailes.

(1/2) I’m heartbroken. I knew the REAL Don Imus. Imus adored his wife and son and his adopted son and had a heart of gold. The work he did for children with cancer will live on forever. Every email he ever sent me made me laugh… https://t.co/3xSOaDmwXQ

Fixed it for you. https://t.co/WeRhWW9QFD