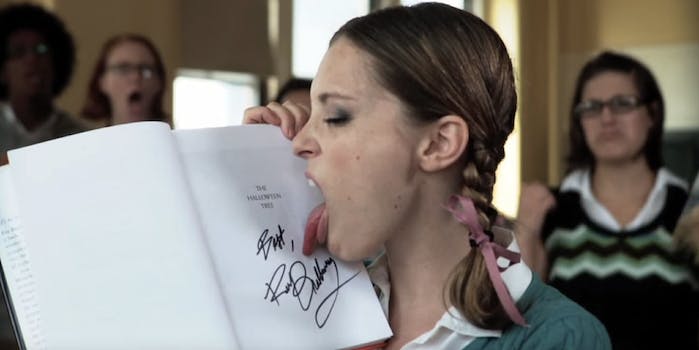 TV's new singing star got her start on the Web.

Rachel Bloom may be the CW’s newest TV star, but the musical actress has viral roots.

Bloom began uploading videos, mostly musical, to YouTube starting in 2010. She built a modest 46,679-subscriber following, but a spate of popular videos helped her reach 10.2 million lifetime views on the platform. Now she’s transitioning to prime time with Crazy Ex-Girlfriend, a musical show that follows Bloom’s character as she tracks an ex across the country in hopes of reconciliation.

Bloom’s been using her YouTube channel to share things from the TV show, like her “Sexy Getting Ready Song,” but before the world falls in love with TV Bloom, there’s a whole backlog of Internet Bloom to explore. We rounded up five essential videos to understanding Bloom’s particular sense of humor.

Bloom’s sexual ode to science fiction writer Ray Bradbury got a lot of viral attention when she released it in 2010. Eventually even Bradbury saw the clip. In it, Bloom pairs a Britney Spears-inspired schoolgirl moment with her graphic descriptions of what she would’ve liked to do to the now-deceased author. It definitely speaks to the style of her Crazy Ex-Girlfriend character.

An animated Bloom does her best Belle impression in this video made in association with Cracked.com. Her Disney princess lives in a plague-infested town where thieves hands are hung off a statue of Jesus and excrement piles high in the street. Way less adorable than singing bookkeepers and bakers.

3) “NOBODY WILL WATCH THE F*CKING TONY AWARDS WITH ME”

The lament of every die-hard Broadway fan is felt in Bloom’s ode to the annual award show that no one, except those die-hard Broadway fans, wants to watch. Her musical number describes the Tonys as “if the Olympics had Nathan Lane” and “the Oscars if the actors had talent.” Not a super popular sentiment in Los Angeles, but theater nerds everywhere nod along with Bloom.

Bloom’s pet-theft number is fully, fully weird. It’s got an electronic pop dance vibe, and it starts off as a pretty normal theme until she reveals the scary truth: She’s a pet stealer who then dresses the pets up like the popular people. The video, produced with CollegeHumor, is full of adorable pets, making it one you can’t miss.

Bloom’s most popular video is a 12-year-old boy’s bar mitzvah fantasy dream about, as the title implies, his desire to touch Bloom’s chest. It plays at pre-teen misunderstanding of female anatomy and involves an animated boob car; 3.6 million viewers can’t be wrong.