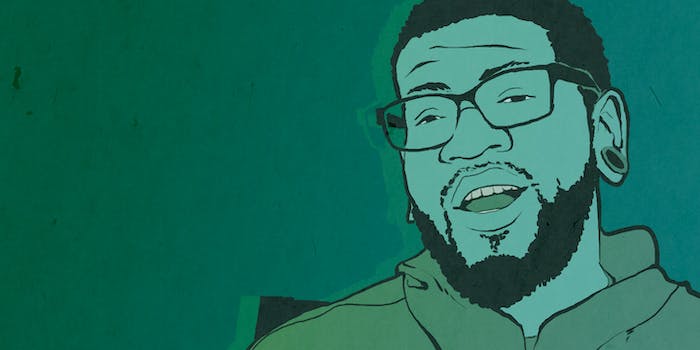 'When you’re faced with your mortality, it puts things in perspective.'

Comedian Nicole Blaine wasn’t planning on meeting Quincy Jones, but when she did, she knew he was special.

“When you’re a standup, you’re running around from show to show,” Blaine said. “You have to get there three hours early.” It was during one of those eternal open-mic waits roughly two years ago that she met fellow comedian Jones. She remembers seeing him when he walked in: People shouted his name. Even though Blaine didn’t know him, he came and sat down right next to her.

Blaine and Jones became fast friends, which is helpful in a comedy scene as sprawling and competitive as Los Angeles’s. Last August, the 31-year-old found out he has mesothelioma, a rare form of cancer, and doctors gave him a year to live. Jones, who’s been doing standup for seven years, says he “snuck” his diagnosis into a Facebook post with other assorted random thoughts. Blaine saw it and reached out.

“I remember my stomach dropping,” she said. “I don’t think he posted at the time that it was terminal.”

A few months later, Blaine asked what he wanted to do while he still had time, and Jones didn’t hesitate: film a standup special. Last year, Blaine shot a low-budget standup comedy special called Virgin Sacrifice, and she and her husband have made films on their own budget, so she figured she could make the special happen for her friend. She launched a Kickstarter campaign to fund the special, and it blew past its modest $4,985 goal in a very short time.

Comedians have found their own unique ways of dealing with a cancer diagnosis: The Jesse vs. Cancer podcast documents Jesse Case’s life as he battles Stage IV cancer; Tig Notaro’s 2012 standup set at Largo is a now-famous example of how one can turn a devastating statement into a masterful longform joke. But Jones says he doesn’t have “cancer material.”

“I’m not choosing to make it a laughing matter,” he said. “It has changed my philosophy on life a lot, and how am I using my time and energy.”

Blaine’s already started documenting parts of Jones’s life, like accompanying him to chemo.

“It’s one thing to meet someone who has cancer; it’s another to watch them get chemo,” she said. “But when he walks in for his chemo, it’s a giant room, [and] there are all these nurses. He is one by one shouting out their names, making jokes. He lights up a chemotherapy unit… He’s just different.”Still, Jones admits chemo changes you mentally and emotionally—it “messes with everything.” Though a special would be a dream for any comedian, he admits he’s “already living out my dream doing comedy in L.A.” This special is a more tangible document of his time here.

“When you’re faced with your mortality, it puts things in perspective,” he said. “You’re like, ‘OK, I don’t have much to show for my time here on Earth. I have family, but not my own family. [I want] something out [there] that I was here.”

The special will film in early April in Santa Monica, and distribution options are still up in the air. In the meantime, Jones has continued to hustle through as many open mics and gigs as he can, while also getting chemo, in preparation for crafting a solid set. As he says, there’s no cancer when he’s on stage.

“The doctors could give you a prognosis,” he said, “but it’s up to you if you want to accept it.”

Update 9:28am, March 17: Ellen DeGeneres invited Jones onto her show to talk about his comedy March 15. During the appearance, the host implored both HBO and Netflix to air his hourlong special, and donated $10,000 of her own money to his already-fulfilled Kickstarter.