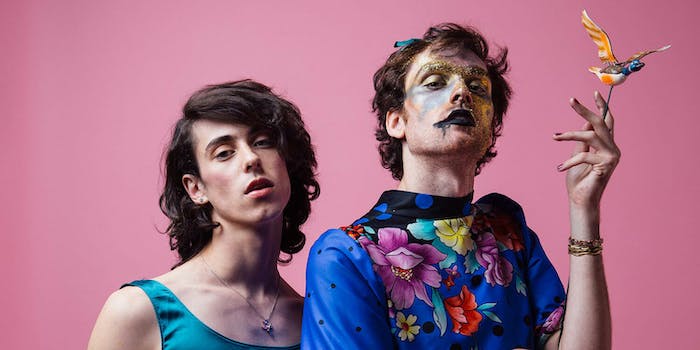 'Music is everything to us, but we feel strongly that this matter needs to be addressed first.'

In a Facebook status, Hopkins and Liv Bruce wrote that they find the allegations shocking and “not representative of who Ben is and the manner in which they try to conduct themselves.” The New York City punk duo recently gained massive popularity in the indie music scene, particularly because of their reputation as LGBTQ advocates.

“We want to respond to some very serious allegations that have been made against Ben,” the duo wrote. “The allegations come as a surprise, but we are trying to address them with openness and accountability.”

Hi everyone, Ben and Liv here. We want to respond to some very serious allegations that have been made against Ben. …

The allegations spread after user Kitty Cordero-Kolin posted in a DIY Chicago Facebook group that Hopkins is a “a known sexual predator, perpetrator of multiple assaults,” according to one Reddit post. Cordero-Kolin also shared screenshots of messages from survivors on Twitter.

“I have personally seen Ben initiate inappropriate sexual contact with people despite several ‘nos’ and without warning or consent,” Cordero-Kolin wrote, “and in the last few months have heard stories of Ben talking crap about other queer artists for their own gain, bullying other queer artists, making unwanted advances on minors despite knowing their age, and emotional abuse in relationships.”

The messages from survivors that Cordero-Kolin received accuse Hopkins of “violating their autonomy and or consent,” making unwanted advances to “almost anyone with breasts,” and calling a former band member an anti-LGBTQ slur.

More screenshots of Facebook messages have circulated that also accuse Bruce and Hopkins’ father of abuse.

And that's it. That the tea. Until more tea emerges. #PWRBTTM NO. ABUSERS. IN. THE. SCENE. pic.twitter.com/q1awVnrlKH

A photograph of Hopkins posing with a swastika has also resurfaced. Hopkins responded to the photo on Twitter in January.

These allegations may shock fans of PWR BTTM. The members are perceived as leaders of a movement to advocate for queer and trans recognition in alternative music, especially since they’ve increased in popularity throughout the last year. They’re also known as allies in the LGBTQ community and have said their shows provide safe spaces in communities.

PWR BTTM set up email address, [email protected], where a survivor or someone working directly with a survivor can discuss allegations expressed on social media. The band says the email will be monitored by a professional mediator and Hopkins will not have access to it.

“Unfortunately we live in a culture which trivializes and normalizes violations of consent,” they wrote.  “There are people who have violated others’ consent and do not know.”

These allegations surfaced the day before the planned release of their latest album Pageant. PWR BTTM said the future of the band, album, and tour remains unclear until these allegations are thoroughly addressed.

Update 11:17am CT, May 12: The band has canceled Friday night’s release concert, two opening acts on its summer tour have dropped off the bill, and touring instrumentalist Cameron West has quit. West issued the following statement via social media:

Hi everyone. Today, like many PWR BTTM fans, I was shocked to discover that sexual assault allegations were levied against Ben Hopkins. From my understanding, these accusations were in fact levied via e-mail months ago, but were left unshared with other members of the band, including myself. In order to provide the highest possible respect to everyone who has come forward, I am hereby ending my tenure with the band as an arranger and touring musician.

Update 1:13pm CT, May 13: According to Vulture, PWR BTTM’s management company and its record label have dropped the band.

In a statement, Salty Artist Management said, “We do not take these kinds of allegations lightly and our thoughts are with victims and survivors of abuse who have been affected by this.”

On Saturday, Polyvinyl Record Company posted the following to its Facebook page.

Throughout our 20 years, Polyvinyl has purposefully operated on the core principle that everyone deserves to be treated…