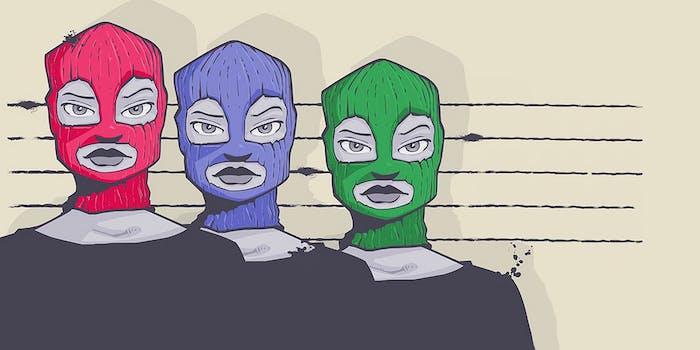 Pussy Riot to star in season 3 of ‘House of Cards’

House of Cards gets radical.

Pussy Riot might be coming to Netflix, in the form of a season 3 House of Cards cameo.

The show is currently filming its upcoming season in Baltimore, and City Paper reported on Friday that Pussy Riot’s Nadezhda Tolokonnikova and Maria Alyokhina were on the set Aug. 7, according to two sources associated with the show’s production team.

House of Cards is known for tackling hot-button political issues, and this info isn’t brand new. It was reported in the Washington Post back in May that the two had met with House of Cards staff while in New York City. When asked why, Alyokhina replied, “It’s important for us to meet people who are doing political cinema in the U.S. because in Russia, it doesn’t exist, and we want to know how it happens.”

Members of Pussy Riot were arrested in February 2012, after performing an anti-Putin “punk prayer” at a cathedral in Moscow. Tolokonnikova and Alyokhina, as well as third member Yekaterina Samutsevich, were sentenced to two years, and their stories are told in the excellent HBO documentary, Pussy Riot: A Punk Prayer, released last year.

It’s also known House of Cards attempted to film in Russia, but the Russian delegation to the United Nations would not allow them to shoot in the U.N. Security Council. There’s no word yet on whether this will be a musical performance from Pussy Riot, or who might play Putin.

Photo by cea/Flickr (CC By 2.0) | Remix by Fernando Alfonso III