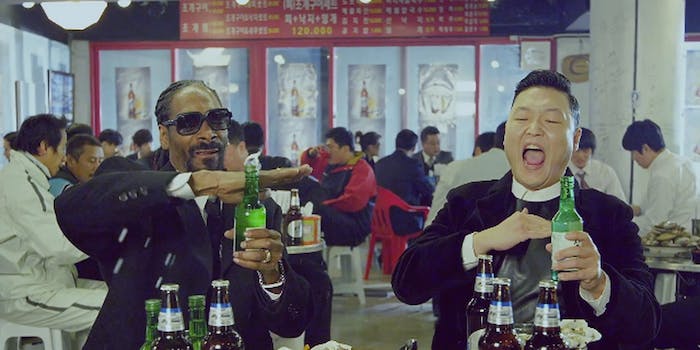 Psy, YouTube, and the curse of the viral hit

At what point will our long national Psy-mare be over?

On Sunday, Psy released his third single, “Hangover,” with a video featuring Snoop Dogg. The premise riffs on the highs and lows of alcohol abuse, and the opening scene looks a bit like a scene from The Hangover, which is perhaps Psy’s way of cleaving even deeper into the American pop-culture consciousness.

Neither the video nor the song are very good, which leads to a bigger question: Do we really want more videos from Psy?

When a song blows up on YouTube, as “Gangnam Style” did, and continues to do—it’s currently the most-viewed video on YouTube, with more than 2 billion views—it’s almost a digital curse for artists. After the success of “Gangnam Style,” there was an unspoken decree that Psy would be a one-hit wonder. This was his viral moment. Even your dad knew about the horse dance.

Psy’s not alone in this curse. Think about the big YouTube hits of the past couple years: Do you remember the follow-up to Ylvis’s “What Does the Fox Say?” or Carly Rae Jepsen’s “Call Me Maybe”? Is it even possible the Chainsmokers will have another “#Selfie,” and did you just shudder thinking about that?

Psy’s “Gentleman” currently stands at more than 600 million views, but it had no dance craze, no bearing on popular culture. “Hangover” has received an impressive 6.8 million views in the past 24 hours, but many commenters lamented that it wasn’t “Gangnam Style.”

Psy is likely tired of “Gangnam Style,” and pairing with Snoop Dogg is a smart way to separate himself from the song and get more eyes on the new video. Psy partnered with Justin Bieber‘s manager, Scooter Braun, so perhaps he will stay in the American pop consciousness a bit longer. Braun apparently told Psy he needs to rap in Korean if he wants to make it in America.

In a recent interview with YouTube Space L.A., Psy admitted to knowing everything he does will be compared to “Gangnam Style”: “That means I have a severe, heavy pressure on my shoulder. … In that way I don’t like the song.”