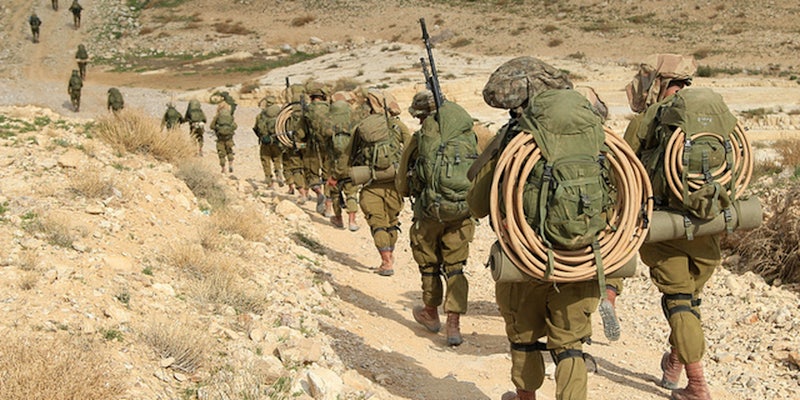 Nothing brings Israeli troops and Palestinian partygoers together like South Korean rap.

PSY may have just solved the Middle East peace crisis.

A group of Israeli soldiers are facing discipline for getting caught on camera dancing to “Gangnam Style” with Palestinian party guests during a patrol of a violent area. The soldiers stopped by to check on the dance hall in Hebron and ended up staying to boogie down to the South Korean rapper’s viral hit.

In the video, taken on Monday, one of the uniformed soldiers is up on a Palestinian man’s shoulders and the rest dance in a circle, holding hands. They are in uniform and carrying automatic weapons. But still, it’s a happy, innocent rainbow of K-pop peace that Yitzhak Rabin couldn’t have dreamed of.

But now the soldiers are facing criticism and punishment from the Israeli military for putting themselves in a dangerous situation, and getting distracted while patrolling the West Bank.

Many, including Guardian columnist Seth Freedman, argued that the soldiers should not be disciplined for dancing because the act was a welcome reprieve from the constant killing on both sides, and because dance humanizes enemies, which could lead to more understanding and compassion.

Just take this 2008 video of an Israeli soldier leading a dance with Palestinian children at a checkpoint.

Or this “Call Me Maybe” Israeli soldier video:

Or this one set to Ke$ha:

It’s some optimism in a bleak situation, Freedman wrote. It shines a light on the absurdity of this conflict. But all the people in the videos above were reportedly punished.

After Monday’s footage was shown on Israeli Channel 2 TV, the IDF said in a statement Thursday that “the soldiers exposed themselves to unnecessary danger and were disciplined accordingly,” but did not say how.

Possibly by having to listen to “Gangnam Style” on repeat.

H/T The Guardian / Photo via IDF/Flickr