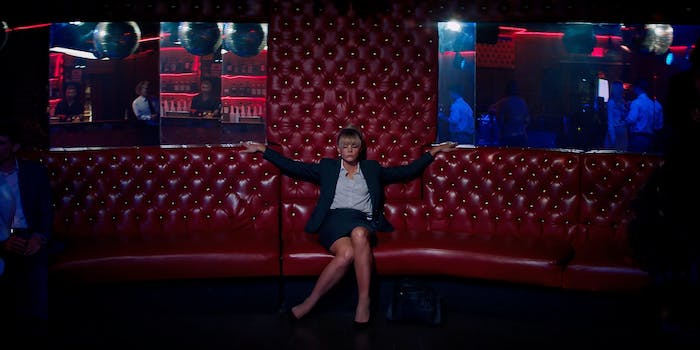 ‘Promising Young Woman’ unravels the complexities of a revenge fantasy

Carey Mulligan is electrifying in it.

Over its nearly two-hour runtime, Promising Young Woman often changes direction at a whim. It’s a revenge fantasy thriller, fueled by the kind of pain and grief that runs skin deep. It’s a breakdown of and a biting commentary on toxic masculinity, rape culture, and a patriarchal society that allows men accused of sexual assault to be given the benefit of the doubt while accusers are vilified. It’s a complex examination of trauma and grief and how even the most intricate levels of revenge don’t always provide closure. It dabbles in elements of suspense and tension, horror, comedy, and even romance—sometimes with multiple genres blending together. Its fantastic soundtrack gives us new context to songs we might have judged too quickly and harshly.

RELEASE DATE: 12/25/2020
DIRECTOR: Emerald Fennell RELEASE: Theatrical, VOD A young woman who spends her nights catching ‘nice guys’ in the act of attempting to take advantage of her while assuming she’s drunk, seeks revenge against everyone who played a role in what happened to her best friend years seven years earlier.
Advertisement Hide

In the hands of a lesser cast or a different screenwriter and director, Promising Young Woman could have been something of an incoherent mess. But the twisted script from writer-director Emerald Fennell (who wrote Killing Eve’s second season) juggles those themes and tones with ease as it relays a nuanced and thrilling story even as the stakes are ramped up.

Carey Mulligan is absolutely electrifying from the very first moment of Promising Young Woman. Cassie Thomas (Mulligan) looks like she’s black-out drunk at a club, struggling to sit up as three men look over and judge her life choices. One of those men (who’s portrayed by Adam Brody) heads over to ask if she’s OK and makes quick work as he takes her home, offers her gross liquor, and gets her into bed. It’s then that Cassie reveals her cards: she’s been sober the entire time. As she later tells a self-proclaimed “nice guy” who tried to have sex with her until she revealed the gambit, it’s a scheme she’s pulled off countless times; just from a single page of a notebook where Cassie tracks her marks, you can see the indents from past pages tallying just how many men tried to take advantage of her when they thought she was drunk. (Nice guys, Cassie notes, are often the worst kinds of offenders.)

Because that’s the scariest thing about Promising Young Woman. It’s not the fear of just how far Cassie might go in her never-ending drive for revenge and closure—the film will make you start questioning your enjoyment of the many people Cassie turns her wrath against, especially as her tactics become even more drastic. It’s in the familiarity of it all.

Cassie’s acts of vigilantism play out a scenario that so many women have ended up in, one that’s used to shame so many women who might have experienced. Early on, Mulligan is the living embodiment of that quiet rage as she stares down a group of construction workers catcalling her; their microaggressions quickly go from “compliments” to slut-shaming to claims that Cassie isn’t that pretty and is clearly a psychotic bitch for reacting in a way they didn’t want her to. The insistence of always giving men the benefit of the doubt or blaming a woman for her own assault, even by those who would react otherwise in other circumstances, and just how far people will go to protect themselves. While Cassie’s wardrobe pops out in the daylight with fun colors, she mostly dons black and/or white clothing when she tries to catch would-be predators in the act, a nod toward her strict moral code; her multi-colored nails retain the only hint of her other self while in vigilante mode.

Cassie’s parents (Clancy Brown and Jennifer Coolidge) openly voice concern that she’s doing nothing with her life since dropping out from medical school, even using her 30th birthday to give her a not-so-subtle hint to move out of their house. Her boss Gail (Laverne Cox) doesn’t understand why she wouldn’t jump at the opportunity to get a better job at Gail’s recommendation. Her former medical school classmate Ryan (Bo Burnham) highlights the potential of finally living her own life (and it’s a tempting one at that as Mulligan and Burnham’s chemistry sizzles on-screen), but Ryan’s reemergence in her life also gives her the open window to finally enact the revenge she’s really been seeking for the past several years.

Promising Young Woman doesn’t go the easy route of a simple kind of revenge fantasy that we’re so used to seeing; it doesn’t shy away from the fact that Cassie’s coping methods aren’t exactly healthy. It questions the audience at every turn, pushing the limits of our own sympathy and preconceived biases, including the casting of several actors known for playing inherently “good” characters. It also takes enticing and bold turns along the way, providing a story that feels fresh. And while the kind of closure Cassie seeks might not ever be truly obtainable, we can at least revel in it.

Promising Young Woman is currently in theaters and is available on demand starting Jan. 15.