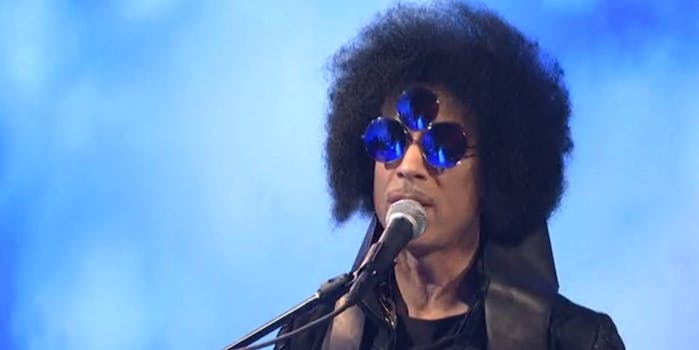 ‘SNL’ looks back at 40 years of Prince with tribute special

Last night, instead of a rerun, Saturday Night Live paid tribute to Prince.

The musician passed away on Thursday and the tributes and thinkpieces quickly started popping up soon after. Saturday Night Live chose to look back on Prince’s history as a musical guest. Jimmy Fallon cited Prince as a “special presence” on the show over the last 40 years, from his first appearance in 1981, to his SNL 40th anniversary afterparty set.

Last year, Fallon recounted how the afterparty performance happened: Dave Chappelle altered him that Prince was in the building, and Fallon called out to him in the subtlest of ways: “Prince, if you’re here, I dare you to come up on stage… All of the sudden the crowd parts and there’s purple smoke and a dude floating towards the stage.”

Coincidentally, last night at the Moontower Comedy Festival in Austin, Texas, Rudolph and Gretchen Lieberum performed as Princess, a Prince tribute act that was already on the books before Thursday, but obviously had some added weight on Saturday.