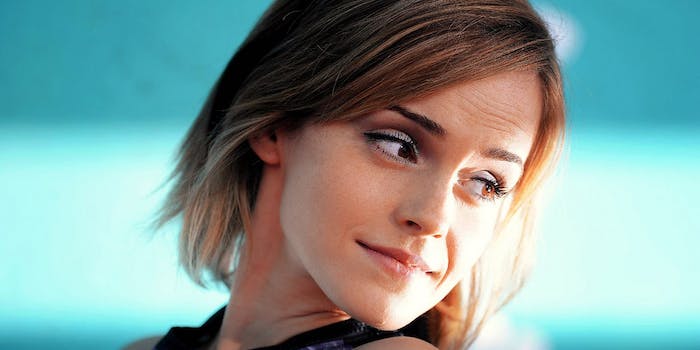 Be still, our beating hearts.

Well, sort of. No, Emma Watson isn’t going out with Daniel Radcliffe. Instead, she has been dating Prince Harry of Wales on the down low, according to an Australian online publication.

Woman’s Day Australia reports that the couple have gone on numerous “secret dates” since Watson split with her Bristish rugby-playing beau Matthew Janney last December. The courtship began with the royal asking mutual friends to connect him with the actress. He then reached out to her via email, which is pretty much the digital age equivalent of passing her a note during French class.

Of course, there really was no need for a dozen other people to be present for the duo’s first date, but a gentleman does everything in his power to make a gal feel comfortable. “Harry didn’t want her to feel like she was put on the spot,” a source tells Woman’s Day. “A party also shows he’s fun and not stuffy.”

Since then, they have reportedly gone on many dates. Plural! Of course the entire Internet is freaking out over the rumor—even if there’s only one source behind the story.

This is not a joke: Prince Harry and Emma Watson are apparently dating pic.twitter.com/X9pkz1wC9w

If Emma Watson and Prince Harry dating turns out to be only a rumour I swear I will cry for a week!!

If Prince Harry Is dating Emma Watson I'll be mad.

Risky move for Prince Harry to ask out Emma Watson via email. Every time I get email from a prince it goes straight to the spam folder.

The overall consensus is:

If Prince Harry and Emma Watson are really dating, then my life is complete.

Quick, someone write Beauty and the Beast fanfic about these two!