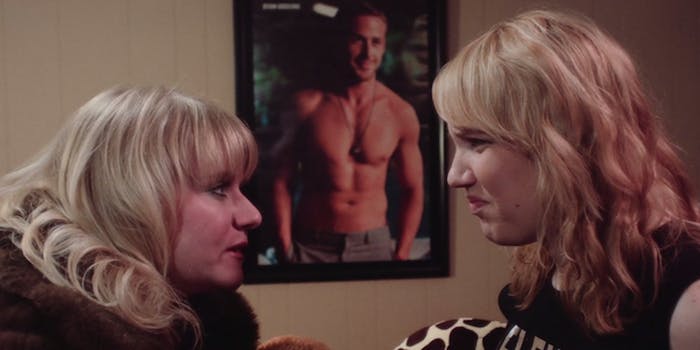 Gwenifer and Natashley are your new best frenemies.

There are a lot of shows that feature awful people doing awful things, but new webseries Pretty Awful offers two new entries for the title of Worst Person.

The three-episode series was created by Austin comedian Amber Bixby and Dustin Svehlak, who runs production company Voltaic Video. Fellow Austin comedian Katie Pengra plays the expletive-spewing alpha dog Gwenifer, and Bixby is Natashley, a hair-twirling spaceball who punctuates sentences with Whip-It hits. We’re never sure where they live or what they do; Gwenifer and Natashley are “frenemies,” existing in a bubble of self-made chaos.

In episode 1, the ladies hide in the closet during a rainstorm, agonizing over a missing hair straightener and whether a sharknado is real. In episode 2, which will debut next week, Gwenifer reads a poem about her muse, Kim Kardashian.

A couple years ago, Bixby and Svehlak worked on Opciono Dos, a short film about a pregnancy scare, and the idea for Pretty Awful gradually grew from there. Bixby wrote a script, and the two passed it back and forth for a while. Then Bixby proposed a webseries so they could do more with the characters, and Pretty Awful was birthed, twitching and mewling.

“I think the whole idea of it [is] being a Beavis and Butt-head-type thing,” Svehlak said. “And what types of situations do we want to put these guys in because they’re just so stupid. What could we force them into and what would be funny?”

“They’re very Beavis and Butt-head meets Mean Girls,” Bixby added. I was definitely trying to think outside the box of what I usually see. There’s a lot of antihero stuff these days.”

Gwenifer and Natashley’s self-obsessed bickering moves each episode along, and their wardrobe sort of defines their characters: Bixby says she went out and found Apple Bottom jeans, and Pengra spotted her fur coat at a garage sale.

Bixby wrote the characters so they understand the world around them less and less and cause more and more chaos. There’s never much resolve, which will be frustrating if you’re looking for a neat ending. (Spoiler alert: They stay awful.)

“We grow up with a lot of characters who are the hero,” Bixby explained. “And as you get older, you start watching stuff with antiheroes, these awful characters. It’s Always Sunny in Philadelphia is one of my favorite shows and they’re awful, but they put themselves in situations where they’re not the worst people. You see people worse than them.”

As for Pretty Awful, however, no one’s worse than Gwenifer and Natashley.