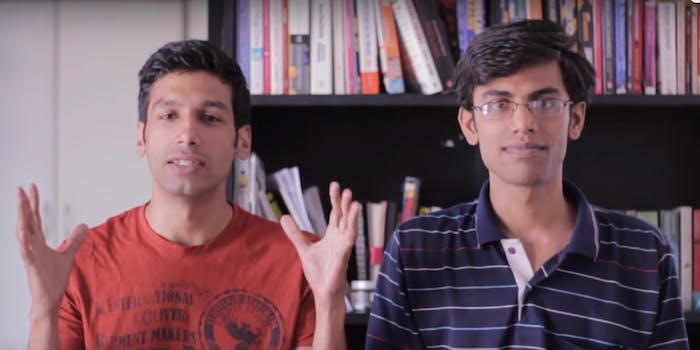 It's sort of like the 'Honest Trailers' of Indian film.

Bollywood movies are a hotbed of hilarity: incongruous plots, absurd fight scenes, rugby games against the Chicago Bulls. The speed in which they’re produced often results in an end product that can seem a little rough around the edges.

Gill and Rath are both excellent hosts, funny and passionate in equal measure, but the true star of the 14-episode run thus far is the source material. It truly boggles the mind.

Take for example Main Prem Ki Diwani Hoon, where the independent Sanjana is upset that her mother has arranged a marriage for her. It’s a routine love narrative, but it’s not the storyline that intrigues. Rather it’s the appearance of a demonic cartoon/dog hybrid and a jaunty macaw with no qualms about shooting up the club.

Then there’s Disco Dancer from 1982, which apparently drew an audience of over 60 million in the Soviet Union. The film itself has all the expected cringey dancefloor shapes while consisting of 47 percent music. All of it is composed by the Indian disco king Bappi Lahiri—a massive fan of Michael Jackson who once created a Hindi re-imagining of Thriller. Here is Lahiri singing his homage to the late King of Pop.

And here is the death of Rajesh Khanna in one of his friendliest roles ever.

You won’t find a humerus much bigger than that of the avenging skeleton from Jaani Dushman: Ek Anokhi Kahani. But while the special effects in what is considered one of the India’s worst ever films veer into comedy, the scene where a crowd of strangers pressures a girl into forgiving two men who attempted to rape her highlights an inherent social problem.

Finally, there’s Kya Kehna, the producers of which clearly thought it unnecessary to employ a continuity supervisor.

May Gill and Rath never run out of source material to skewer.