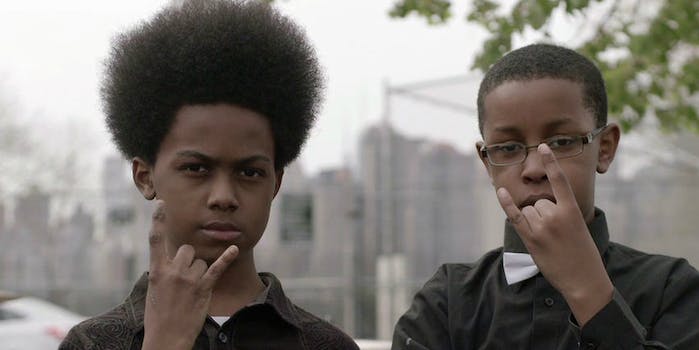 Since they were four years old, preteens Malcolm Brickhouse and Jarad Dawkins have been plotting world domination. They write love songs and tracks about their lives and school. The sixth graders take their talents to the streets of New York and stun passersby with their precocious metal band, Unlocking the Truth.

Heartachingly, they also have to deal with haters. The Brooklyn pair told online magazine The Avant/Garde Diaries about how they go against the grain and do their own thing.

“I don’t get bullied, but people bother me about it,” drummer Dawkins said. “At times it offends me, at times it doesn’t. I write songs about it.”

“I know a lot of people doubt me,” added guitarist Brickhouse, “but then I really don’t listen to those people, because I know I’m going to be famous anyway.”

Dawkins is trying another tack on taking on the taunters: He’s writing a book about people who were bullied at school and started a globe-trotting band that turned them rich and famous.

“We do want to inspire people: don’t let nobody push you down. Be free, do what you wanna do. Just be yourself, and do what you do best.”

As these two videos will attest, that’s what Dawkins, Brickhouse, and bandmate Alec Atkins do best.