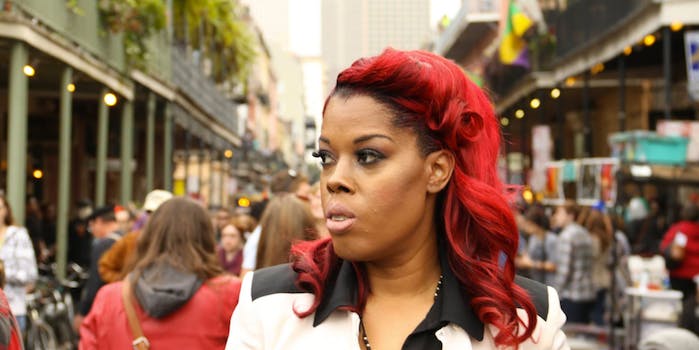 ‘Presenting Princess Shaw’ and the human side of virality

How YouTube connected an Israeli producer and a New Orleans singer.

In a 2013 clip, we see Samantha Montgomery, aka Princess Shaw, framed vertically in low light. She’s there “just to talk,” but then she casually introduces what she’s about to perform: “This song is called… I don’t know, maybe it will be called ‘Give It Up.’”

That song went on to form the foundation of a 2014 remix by Ophir Kutiel, aka Kutiman, a musician and producer who lives in Israel. The track, part of his Thru You Too project, features 23 different YouTube clips of people playing instruments or singing, and Kutiel has made several videos of amateur musicians stitched together to create new songs. It now has more than 2 million views, and brought together Kutiel and Montgomery, who were strangers at the time.

Presenting Princess Shaw, a new documentary by Israeli filmmaker Ido Haar out Friday, pulls back the curtain on a time before the virality. We see Montgomery visiting friends in her New Orleans neighborhood, and shadow her as she works at an elder care facility, often singing for the residents. At night she does open mics to scant crowds at local dives. “My name is Princess Shaw,” she says before one performance to an nearly empty house, “and I’ve been fucking reborn.”

There’s a duality at play: Scenes of Montgomery struggling to pay bills, reuniting with an ex-girlfriend, auditioning for The Voice, and talking about horrific childhood sexual abuse are intercut with scenes of the slight and bearded Kutiel silently working on his craft in a small room of his home in Israel. We’re the voyeur, watching him watch Montgomery’s vlogs. YouTube for her is a platform for vulnerability and catharsis—a refuge. For Kutiel, it’s a place where unknown quantities can provide new material. Just before he publishes the “Give It Up” clip, the mouse lingers on the button, as if to emphasize that just one click will change her life.

And that’s where some of the discomfort creeps in. Haar has known Kutiel for “many years,” he tells the Daily Dot, and had wanted to do a doc on what Kutiel was doing for a while. When he was shown Montgomery’s videos before he started his project, he “really fell in love with her songs and with her honesty and directness and courage.”

But he knew Kutiel would be putting out a clip that would get some buzz: In the film, we see Montgomery gasp and tear up over coverage in the New York Times. When Haar initially approached Montgomery about the project and started filming in 2013, he left out this piece of info, a point many reviews have criticized.

Haar says he wouldn’t have had a film if he didn’t withhold the reveal, and adds that he didn’t want to spoil the moment for either of them, or feel he was harboring some “dark secret.” Instead, it’s more of a pivot away from traditional documentary films, where you “tell everything,” he says. Haar doesn’t interview Montgomery’s friends or family, or even Kutiel. He just observes her.

YouTube has presented a new kind of economy, one where remix culture and memes can be lucrative or star-making, and pluck creators out of obscurity, however briefly. While Kutiel has more than 2 million views on the clip, Montgomery still only has a little over 1,000 subscribers on her channel, her videos a couple hundred views each. There hasn’t been the swell that often comes with viral success. The film also opens with a quote attributed to the free culture movement, which states that “a free culture is one where everyone thinks of themselves as a voice in a huge choir.”

When asked about his approach in September 2014, Kutiel painted a more casual picture of the community and what he sees as collaboration.

“Me and all the other musicians just sit home alone in front of the computer, and after so many times I watch them and it’s like I know them by now,” he said. “And yeah, eventually you get the feeling that everybody knows each other and they’re playing together.” In one of the vlogs Haar includes, Montgomery illuminates the more human aspect: “It’s not easy to be alone with myself.”

Montgomery eventually does meet Kutiel and performs with him in Tel Aviv, and Haar relates that she and Kutiel recorded an album of original songs that will be released soon. But at the end of the 80-minute film, we’re left wanting more time with Montgomery, her stories, and her ever-positive outlook. She’s the foundation of a more complete film about what it really means to connect online, and off.