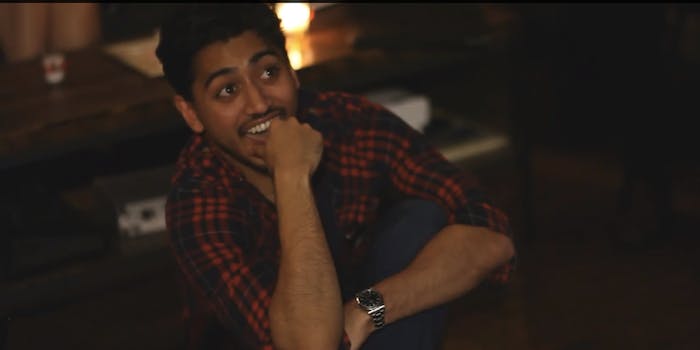 T.J. Misny reveals the secret to pranking the CEO of a prank video company

First you take their money...

Love them or hate them, prank videos are ubiquitous. They may be painfully elaborate, idiotically simple, or even sweetly playful, but above all, prank videos are void of meaning. If you click play on a prank video, you likely are not anticipating a heartfelt lesson in social justice.

But in this case, you’ll get just that.

When prank company PrankDial enlisted T.J. Misny and Jason Park to create a holiday video, the duo created a prank of epic proportions, pranking the CEO of the company, and anyone who dares to click the play button on their obliquely titled video.

The video does indeed feature a prank, but it also features inspiring stories from struggling New Yorkers who help Misny and Park prank the CEO by accepting cash gifts from the budget he gave them to create the video.

The pranksters include Shawanna Vaughn, a legally blind woman living in the Bronx who is determined to keep giving back to her community; Buya Jammeh, a journalist from Gambia, who is separated from his family while living in political exile in the US; and Reconnect Cafe in Bed Stuy, a space dedicated to engaging young people at risk for violence within the community.

Misny, whose directorial credits include Why Starbucks Spells Your Name Wrong and Broad City: I Heart New York, spoke to the Daily Dot about the anarchy of pranks, taking risks, and creating content in a clickbait culture.

Can you tell me a little bit about what inspired the video?

My friend, Jay Park, had this connection with the company PrankDial. He said, “Look, PrankDial wants to shoot something with you. And immediately [I wanted] to capture the fun and the anarchy of a prank. I don’t look at myself as a prankster—I don’t pull pranks on a regular basis. [But] what’s fun about [pranks] is there’s a possibility of failure—something can go wrong. You don’t know what the reaction’s going to be. And the only thing that I could think of that would capture that rift was to target the CEO, [Fahim Saleh], to show that PrankDial is a unique, forward thinking company.

[We thought], why don’t we just use the budget to surprise him in some way? Right after that, the idea of incorporating a charitable effort seemed like a no brainer because we’re also going to sort of prank the audience. When you see the link on the PrankDial page, you’re not expecting to learn about social justice, so that seemed like a great trojan horse.

We’re going to give you a Gambian refugee, at risk youths in Bed Stuy and how they’re trying to change the social dialogue, and we’re going to tell you about people who are struggling and giving back to their community.

How does the clickbait culture of Web content influence your work?

I’m always thinking about what’s relevant and what will keep people watching.

The thing is—and I’m guilty of this too as a viewer—I always think, ‘Is this full thing going to be worth my time?’

You’re always like ‘my time is so valuable,’ and it’s kind of perverse because you’re always ready to move away from what you’re experiencing now to experience something better.

So would you say you’re using that culture to motivate you to make higher quality or more visually appealing content?

It can be a positive thing in some ways because [creators] make things extra dense and [we] make things look extra sharp to stand out against the competition. You have to find ways through writing or performance to get the audience to trust you, or they’re going to move on to something else.

Film is a visual medium so [making things look good] is not something new, but I try to pretend I’m not making things for the Web. The Web is not the minor leagues anymore. I think there was a time when people who were creating and financing videos would say, “It’s okay. You don’t have to execute on the highest level, because it’s just for the Web.” But I think in the last year or so, it’s become clear that the only way to reach people on the Web is to do your best work and make things as if you were making them for the big screen or TV.

Your videos tend have high production value and look very polished. Do you think, amidst all the saturated content that’s available, people get excited about sleeker-looking content?

I think even if people aren’t tech savvy—or even if they can’t pinpoint what’s different—I think there’s something subconscious that occurs when people feel that something is well-considered. I feel, as a creator, if you really take care about what you’re doing, and you care about your writing and your performances, that’s going to translate and come across as something that’s of value.

I’ve been using the Arri Alexa and not all creators have access to that [equipment], but you can still achieve that with your writing. If you take care and you have something witty or striking or unusual to say, that’s the tool you have to get people to say, “I trust you. Okay, three minutes I’ll stay with you and watch this thing.”

Yeah. It’s almost a lot to ask someone. Or in the case of the PrankDial video, we’re asking you for seven minutes, but I hope that in seven minutes we can make you laugh and think about the world and surprise you a few times.

That is my favorite compliment, when people say, ‘I didn’t think it was that long.’

This video seems like it really captures the dichotomy of humor and seriousness that can be found in your work. What’s your take on how it turned out?

What’s tricky about this particular prank video is that nothing in that video was staged, so committing to this idea with no way of turning back was a new challenge.

I hope it doesn’t come across as sounding like I’m so pleased with myself, but I’m really happy with the attention this video is getting. It was a pretty massive risk to be given a substantial budget and say, ‘We’re going to do something totally different and hope it’s going to connect with people.’

I’m maybe more proud of this than anything else I’ve done because it is that anarchic humor that I love, and the stories we’re telling really matter. In the past I’ve combined dramatic and comedic elements, but it’s been rewarding to combine extremes of absurd humor and social justice, in a format where people might not expect an emotional story.