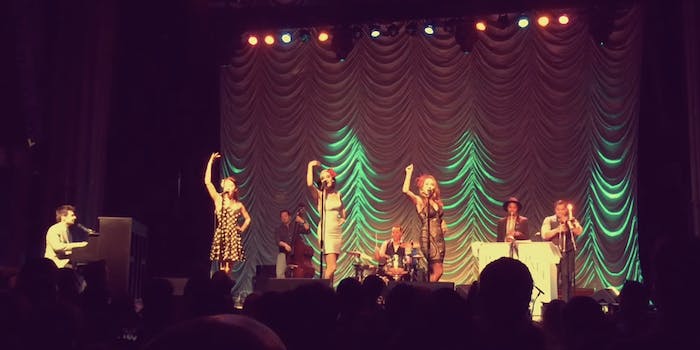 YouTube's vintage faves are winning over hearts and minds across the country.

Postmodern Jukebox may dominate YouTube when they release each new vintage cover of contemporary pop hits, but they’ve also confirmed their excellent performances aren’t the result of editing tricks with their standout live show.

The group played their first-ever Los Angeles show as a sold-out performance at Club Nokia Tuesday, where the audience was a melting pot of demographics bonded by one thing: a love for pop tunes with a vintage flair.

The show was the culmination of a nationwide tour, with the group heading to Australia next. They already play massive shows in Europe, so dominating the live American market was an easy next step.

The show clocked in at two and a half hours, with singers playing tag-team while the workhorse band, led by Scott Bradlee, held court all night. There’s two unique musicians that accompany PMJ’s standard piano, bass, drums, and horns. Sarah Reich performed as a tap dancer, both as an accompanist on various numbers and her own vintage solos. Daily Dot favorite Tim Kubart, also know as Tambourine Guy, joined for a few tracks. He’s just as energetic in person, though his icing performance only joined in on select dates this tour.

In L.A., guest performers padded the bill and mixed with PMJ’s regular touring crew. The crowd was blown away by performances from The Voice alum Maiya Sykes, who belted New Orleans-style Darkness hit, “I Believe In a Thing Called Love,” while Wilkie Ferguson homaged Usher’s stripper anthem “I Don’t Mind” as a Las Vegas-style review. American Idol alum Haley Reinhart wowed with her cover of Radiohead’s “Creep,” while Von Smith, the “heartthrob of PMJ,” closed out the night with Taylor Swift‘s “Shake It Off.” Even the normally stoic security guards were getting their groove on, and offering their newly formed friends free drinks.

The performers made sure to praise the live music revolution throughout the event, even though they made their mark as YouTube stars. And, just like a YouTube video, this had sponsorship. Before the night kicked off, they broadcast an old-timey radio ad for Tinder. To be fair it was a room primed for romance, and the heartbreak that followed, so the brand integration was irrepressibly appropriate.