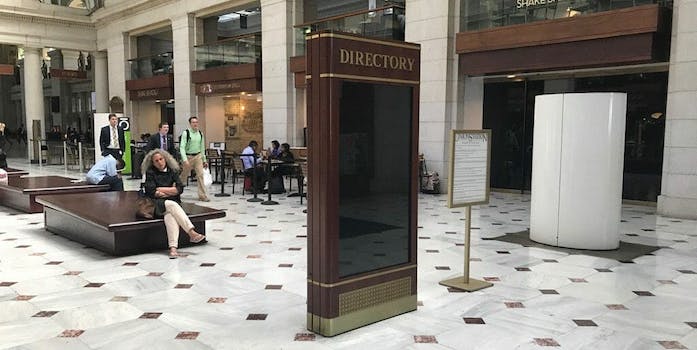 Was it a hacker? A station employee who opened the wrong browser tab? Security is looking into it. But in the meantime, footage from the scene of the event is slowly appearing online.

As some passersby noticed the graphic sex and tried to turn off the screens, others were prescient enough to break out their phones. Gizmodo tracked down video of one directory monitor positioned right outside a Chipotle, and it shows confused commuters discovering the monitors:

You can head here to see both semi-SFW and NSFW snippets.

Beverley Swaim-Staley, president and CEO of the Union Station Redevelopment Corp., told the Washington Post that property management is looking into the issue.

“We’ve asked them to certainly investigate the incident to make sure this doesn’t happen again,” she said. “The downside with new technology is that it comes with new risks.”

No matter who turns out the be the culprit, shoutout to everyone in the video for taking this curveball in stride.