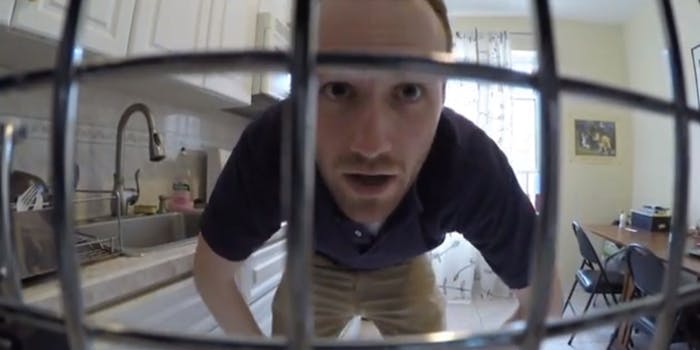 Testing the comedic limits of the GoPro.

If you’re a cat owner, you’ve probably had to struggle to get your fur child in its carrier and to the vet. In the first episode of Upright Citizens Brigade performer Vincent Moore’s new webseries, Points of View, he tells this familiar story with a twist.

He’s apparently strapped a GoPro to his cat’s head, so we get the feline’s point of view as Moore walks to the vet. Then he stops to tie his shoe, and things get weird.

GoPros have given us access to the insides of animal’s mouths and dishwashers, but this might be the first time they’ve been applied to sketch comedy.

“The idea came about after watching a bunch of GoPro videos online and being inspired by how adventurous the filmmakers are with their cameras,” Moore told the Daily Dot. “As GoPros are so portable, you can really put them anywhere and film from a seemingly infinite amount of angles and perspectives. Considering the wide variety of uses and the surprisingly powerful footage that comes out, I decided to get one and play with how it could be applied to sketch comedy.”

Moore says another episode is scheduled for release next week, exploring a different point of view. In the meantime, be the cat you want to see in the world.

Clarification: No actual cats were harmed in the making of this video. Moore explained he set up the GoPro inside the carrier “using rubber bands.”