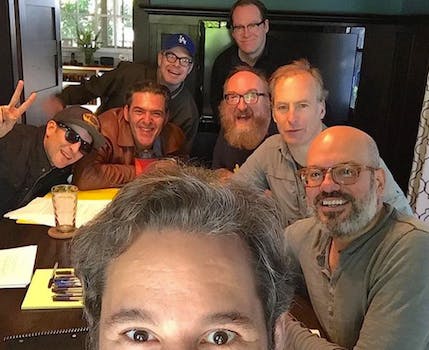 ‘Mr. Show’ could land back on HBO this year

The gang's all here?

Fans of the ’90s sketch comedy series Mr. Show now have a reason to look forward to 2015: It looks like a reunion is going to happen.

On New Year’s Eve, Tompkins tweeted out a photo of himself and several of Mr. Show‘s cast members and writers, including Odenkirk and Cross.

Eight men out… of the 1990s. Maybe something new coming from the Mr. Show gang in the new year? #MrShow pic.twitter.com/gBy8CQ49nv

In an interview with Splitsider last November, Odenkirk mentioned that a 20th anniversary reunion special might be in the works:

We’re talking about it. I’d like to see that happen. I’d like to do more work with David Cross because we work great together.

HBO has had success with dramas like Game of Thrones and The Newsroom, but it’s in desperate need of more comedies like Girls and The Comeback. Considering its enduring influence, Mr. Show would be the perfect fit.

It’s hard to pick the best Mr. Show sketches, but here are a few that never get old.

Update 5:02pm CT, Jan. 7: David Cross confirmed our speculation in the rewards for his latest Kickstarter project. As Splitsider pointed out, “[t]ucked away in the rewards is also the most concrete confirmation of a 2015 Mr. Show reunion yet,” an opportunity to be cast in Mr. Show, which he says will be filming in March or April.