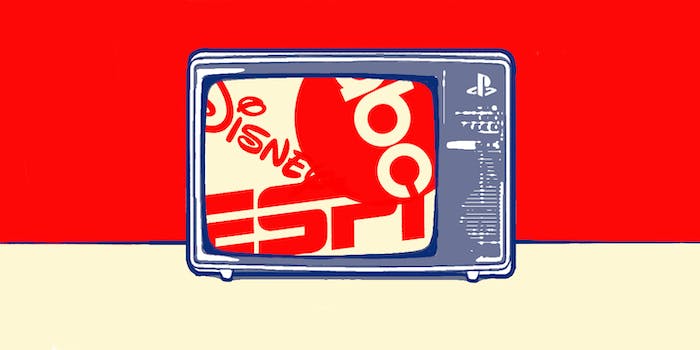 There’s currently no indication of how much a TV package of Disney and ESPN would cost per month.

PlayStation Vue, Sony’s à la carte streaming service, is gaining more than a dozen channels for subscribers thanks to a monumental deal with Disney and ESPN.

The deal will bring all Disney- and ESPN-owned channels, ABC-owned local stations, ABC Family (which will be known as Freeform starting in January), Fusion, and many other channels for viewers. ABC primetime shows will become available as part of multichannel packages, and affiliate stations can opt in to the service.

PlayStation Vue launched earlier this year without ESPN, but getting it added was only a matter of time for Sony.

“This deal demonstrates our continued commitment to offer the best content on TV to PlayStation Vue users,” Dwayne Benefield, VP and head of PlayStation Vue at Sony Network Entertainment International, said in a press release.

“PlayStation Vue provides a unique way to engage with our content and an opportunity to reach a segment of viewers who want a different kind of television experience,” added Justin Connolly, Disney and ESPN Media Networks’ executive vice president of Affiliate Sales & Marketing. “The addition of our content to the PlayStation Vue platform will make the offering more compelling as consumers navigate their video options.”

Subscribers will be able to watch shows within three days of airing without needing to access PlayStation Vue’s DVR and watch content across multiple devices both in and out of the house.

There’s currently no indication of how much a TV package from Disney and ESPN would cost per month, but for comparison, PlayStation Vue offers Showtime for $10.99 a month, Fox Soccer Channel for $14.99 a month, and Machinima for $3.99 a month along with different levels of access ranging from $49.99 to $69.99 a month. And while Sing TV also offers ESPN, PlayStation Vue will have more channel options for potential subscribers.

PlayStation Vue already has dozens of networks including CBS, Fox, NBC, AMC, FX, and MTV in Chicago, Dallas, Los Angeles, Miami, New York, Philadelphia, and San Francisco. For some people in those cities, PlayStation Vue might be a viable option instead of paying for cable.