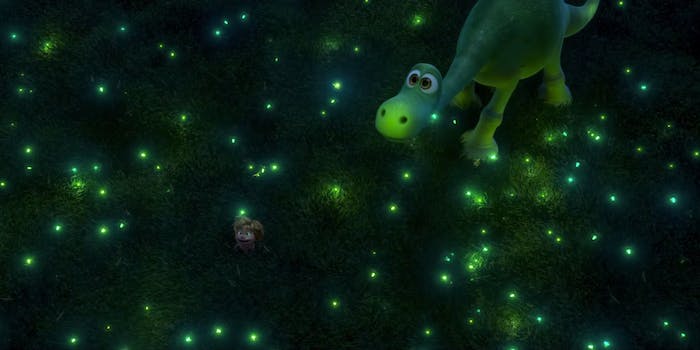 How to Train Your Caveman Where the Wild Dinos Are.

Pixar fans got their first teaser of the company’s next film The Good Dinosaur when they watched Inside Out. On Tuesday, Pixar released the first full-length look at the film, which finds the animation powerhouse traveling well-trodden but still-adorable paths. The Good Dinosaur is a story about a friendship between an apatosaurus and a cave-dwelling boy in a world where a mass extinction event never happened.

But first, a warning for those of you who don’t like anthemic indie choruses chanting over your scenes of childlike wonder: This trailer is straight out of the Where the Wild Things Are playbook in that regard, so we hope you like the band Of Monsters.

Now that we’ve all been sufficiently imbued with joy and awe at the beauty of the universe and the lasting power of friendship, we can talk about how the trailer tells us nothing about the plot. It really seems more like The Fox and the Hound without the creepy racialized overtones—and hopefully without the same levels of innocence-shattering tragedy.

Pixar wouldn’t do that to us, right?