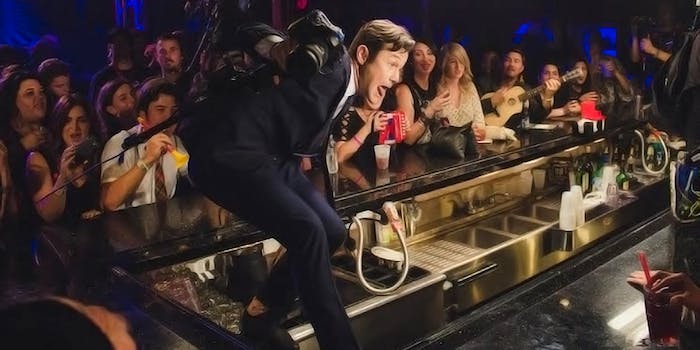 Pivot is television programming for the ‘new greatest generation’

"This is a generation that not only invented FOMO, which is kind of driving social media, but they also invented JOMO, which is the joy of missing out.”

Do TV viewers want to change the world?

That’s what Pivot is proposing. In the past year, the online channel has attempted to bridge the worlds of social good and digital media, and is aiming its mission at millennials.

At SXSW, Participant Media, Pivot’s parent company, held a day of panels for its 10-year anniversary, and discussed this new era of “clicktivism” and digital engagement for the conscious consumer and digital do-gooder. During Pivot’s panel, Jacob Soboroff, co-host of Pivot’s Take Part Live, joined comedian W. Kamau Bell and producer Michael Davies to analyze the future of digital media and television.

Davies, producer of AMC’s Talking Dead and Bravo’s Watch What Happens Live, examined how old and new media have come together on Twitter especially, and proposed we’re now living in a “multiple screen world.” He predicted that in the next five years, subscription services will be “the greatest democratizer,” as viewers bypass networks, start their own channels, and invite people to watch. It was also proposed that the conscious consumer is not a niche market, which is the crux of Participant and Pivot’s mission.

Participant Media was founded by Jeff Skoll, who was also eBay’s first president. They’ve been involved with films like Waiting For Superman, An Inconvenient Truth, and The Square, all of which focus on social change and engagement as entertainment. This translated into Take Part Live, a daily talk show offshoot of their social media campaigns, which engage viewers to sign petitions demanding transparency from the NSA or advocating clean water initiatives. Take Part connects content to action, and Pivot is attempting to take that one step further.

Evan Shapiro, Pivot’s president, likes to call Participant a “category creator,” and last August, Pivot was launched to continue this mission of inspiring social change through online media. The channel is directed at the next generation of TV viewers, which Shapiro labeled “the new greatest generation.” Their first show was the comedy Please Like Me, which focuses on what it’s like to be a 20-something dealing with life, relationships, and depression.

HitREcord, which debuted in January, might be their most successful show yet. Hosted by actor Joseph Gordon-Levitt, it hinges on interaction between host and viewer. Shapiro says Gordon-Levitt pitched the show to all the big networks, as well as Pivot, and proposed the idea of a “postmodern Muppet Show, done in a open-source fashion, with him as Kermit.” He eventually settled on Pivot because he cosigned their approach. Shapiro adds HitREcord is a game-changer in TV programming, the first truly open-source created television show, and it comes with an important message about the future of engagement.

“Be aware of your responsibility as a content creator,” Shapiro says. “Every tweet you send, every Instagram photo you post is content, and by putting it up on the Internet, you’re either subverting your rights or offering your rights to a third party to use that content. With HitREcord, it’s different. We encourage the collaborative, but we compensate them if the content is used.”

“For the most part, [millennials] had been stereotyped and almost marginalized as a group,” Shapiro says. “And we put a flag out and said, ‘We think millennials are the new greatest generation, and we think they were put here on Earth to save the planet from itself.’ And we really think we sparked a major conversation about who this generation is and what they can do, culminating with a study that came out a little while ago that showed this is the generation that wants a career that matters, a life of purpose.”

To that end, Pivot will soon roll out TerraCycle, a workplace comedy about a company that recycles trash into new products, and Welcome to Fairfax, a docu-drama about entrepreneurs of color in Los Angeles. Pivot also offers reruns of Veronica Mars and Buffy the Vampire Slayer, tapping into that cult-following audience. It’s a unique balance of programming, one that plays into the “campfire effect” of social media.

“This is the first digitally native generation on the face of the Earth, and they feel completely overwhelmed by it,” Shapiro explains. “The conventional wisdom is, ‘Oh, they’re always on their phones, can’t get their face out of Facebook.’ This is a generation that not only invented FOMO [fear of missing out], which is kind of driving social media, but they also invented JOMO, which is the joy of missing out.”

In this era of clicktivism and hashtag activism, this fear of missing out has taken on an interesting context. A trending hashtag can shed light on an important subject, and start discussion, but doesn’t always translate to real-life change. Sharing links to Change.org petitions and videos of uprisings often replace real-life activism, but make us feel more connected somehow. It’s a passive activism. Shapiro argues the passive and active content creators will converge in the multiple screen world, and “create a renaissance around shared experience.”

“HitREcord really became that for us,” he adds. “If you watch the Twitter feed, you see people who actually contribute to the creation of the show, watching the show. And a lot of [viewers] are creating their own Google Hangouts and hanging out there. We didn’t do it; they did it on their own.”

This circles back to Davies’ idea about the future of TV: subscription services that bypass the big networks, allowing fans and artists to create their own networks, which has already happened on YouTube. Yes, viewers are creating content while watching TV, and making a connection with other viewers, but can Pivot inspire them to go beyond the multiple screens and change the world on their own?