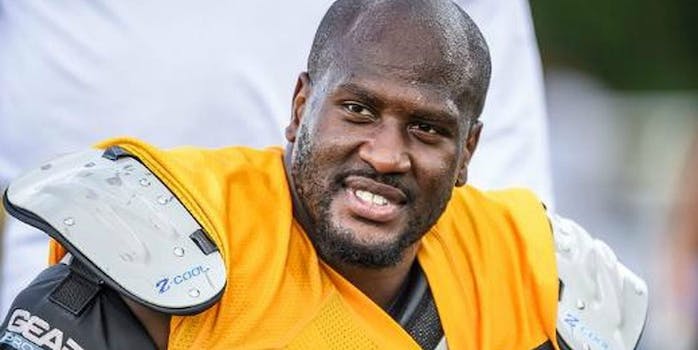 James Harrison tried documenting his drug test, but the NFL stopped him

He was threatened with a failed test if he continued to record.

James Harrison has played in the NFL for 13 seasons, making five Pro Bowls and running up at least $150,000 worth of fines since 2010. As a 38-year-old who’s getting ready for yet another season, he was selected by the NFL for a random performance-enhancing drug test on Tuesday. But after the tester arrived at his home to retrieve Harrison’s urine sample, Harrison insisted on video recording the process.

The tester said no and so did the tester’s boss, and after a while, the league said it wouldn’t test him if he didn’t put away his phone, meaning he would fail the test and get suspended. So, Harrison put away his phone.

But not before he posted the interactions to his Instagram page.

As Harrison later wrote on Instagram, “To clarify—I never have a problem being tested. I wasn’t videoing the test because I was suspicious of the process. I was only videoing leading up to the actual test to post it on IG for what I think is interesting behind the scenes content for the fans, which I had done when I was tested earlier this year, with no notice of wrongdoing. If the league can invade our space and interrupt our preseason training with shows like Hard Knocks because it’s interesting behind the scenes content for the fans, why can’t I post this?”

It’s a question that has not yet been answered by the NFL.