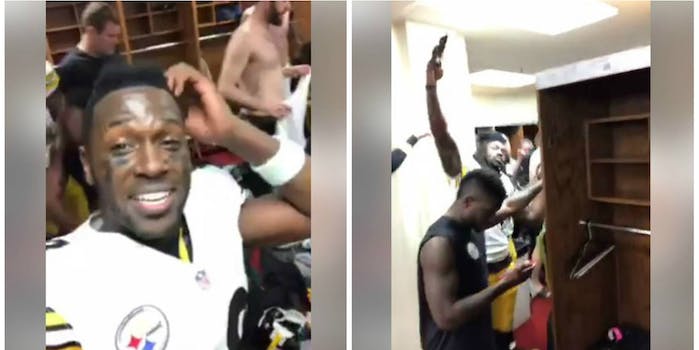 So much for keeping a low profile on social media.

Football coaches get emotional in postgame locker rooms, so whatever is said in the heat of the moment or, in the case of the Pittsburgh Steelers on Sunday, after a big playoff victory should be taken in the context where and when it was spoken.

But we don’t get often get a glimpse of an NFL coach calling a future opponent “assholes,” and the reason the internet exploded Monday morning was because Steelers coach Mike Tomlin did just that after Pittsburgh beat the Chiefs.

And it was captured all by Steelers receiver Antonio Brown during a Facebook Live broadcast. The best part of it all: Somebody tells the team on the video to “keep it cool” on social media, which is the exact opposite of what Brown achieved late Sunday night.

Here’s the entire 18-minute video in which Tomlin talks about next week’s opponents, the New England Patriots (be forewarned, there is brief male nudity).

Said Tomlin: “When you get to this point in the journey, not a lot needs to be said. Let’s say very little moving forward. Let’s start our preparation. We’ve spotted these assholes a day and a half. They played (Saturday); our game got moved to tonight. We’re going to touch down at 4:00 in the fucking morning. So be it. We’ll be ready for that ass. But you don’t tell have to tell them we’re coming.”

Tomlin also tells the team to keep a low profile.

Brown has done neither, and then somebody says, “Keep it cool on social media. This is about us. Nobody else.”

Well, now it’s about everybody (or at the last the 32,000 who were watching the broadcast at that moment).

Either way, it’s an interesting look at what happens immediately after an NFL game in a jubilant locker room (and it showcases just how tiny some NFL visiting locker rooms can be). As Brown has shown, there’s a reason the media has to wait 10-15 minutes after a game before they can invade the locker room for postgame interviews. It’s called a “cooling-off” period. Perhaps Brown’s phone could have used it.