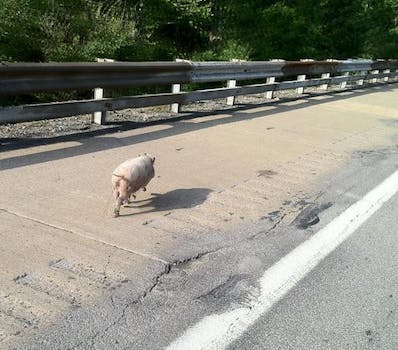 “Just hoofin' it down the highway."

Now a scarf-wearing pig that got loose on a parkway in Pittsburgh has become the latest animal parody account to make a mess online.

The baby pig mysteriously got free Wednesday morning on Parkway West and ran into the woods before the police could catch it, WTOV, an NBC affiliate, reported.

“I am so fancy with my Hermes. Hey, you in the SUV! Look at me!,” tweeted the parody account, @sharpdressedpig. “Just hoofin’ it down the highway. Like you wouldn’t want to get the hell out of Pittsburgh.”

The parody account has collected 270 followers and used the hashtag #pigontheparkway to keep momentum going. But with another parody account, @parkwaypig, making a ruckus, time will tell which will ultimately hog the road.