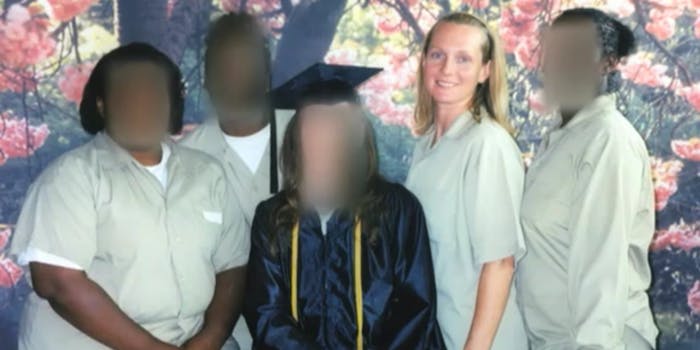 The awesome blog that spawned “Orange Is the New Black”

Orange Is the New Black is the latest hit in Netflix’s new chain of original programs, brought into existence by Weeds’ Jenji Kohan and set in a women’s prison. The show’s main character, Piper Chapman, is our entry point into the lives of more than a dozen different inmates of varying ages, races and classes. The show’s popularity is a refreshing surprise, and so is the dialogue it’s started online about women’s representation on TV.

But the narrative started with Piper Kerman’s 2010 memoir, Orange Is the New Black: My Year in a Women’s Prison. You can see the genesis of that book on Pipebomb, the blog Kerman and her fiance at the time, Larry Smith, kept while she was imprisoned.

The blog spanned the length of her 13-month sentence in Danbury Federal, from February 2004 to March 2005, and throughout, Smith refers to Kerman lovingly as “our girl.” In browsing the entries, little details of prison life emerge.

Here are five interesting tidbits from the Pipebomb:

(popular at birthday and going away parties)

An informal poll was taken, and Kerman returned with a list of the top 10 books inmates were reading. That list includes My Life Among the Serial Killers by Helen Morrison, Middlesex by Jeffrey Eugenides, and The Collected Works of V.C. Andrews, in Spanish. “Resonates strongly with Danbury’s Latinos for some reason,” Kerman explained. “Anne Rice does, too.”

Books were popular at Danbury, and Kerman had a lengthy Amazon wishlist, which friends and strangers could peruse. There’s something telling about The Odyssey and Jean-Jacques Rousseau’s The Social Contract being on there.

The story of Vickie Stringer

Smith posted a New York Times article about former madam and drug dealer Vickie Stringer, who wrote a memoir in prison, and went on to found a publishing company. She became known as the “queen of hip-hop lit.”

Kerman wrote a FAQ for Pipebomb’s first entry, explaining why she’s going away, and how mandatory minimum sentencing eventually landed her federal prison time. It’s funny and smart, and features pictures of her cats, Wayne and Lady Bunny, plus a link to a sleepy cat video, which will remind you how far the Internet has come in the past decade.

Kerman goes into more detail about her friendships in prison here.