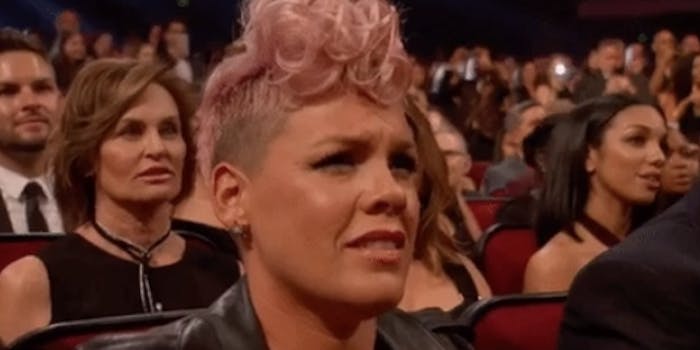 Her AMAs reaction raised some eyebrows.

Aguilera was at Sunday night’s festivities to honor of the 25th anniversary of Whitney Houston‘s iconic Bodyguard soundtrack, which features many a tearjerker. She took the stage mid-show to perform a medley of hits like “I Will Always Love You” and “I’m Every Woman,” and at one point, the camera cut to Pink making a certain facial expression:

P!nk's face during Christina Aguilera's Whitney Houston tribute has me rolling on the floor. #AMAs pic.twitter.com/a8y160BRyE

Stills of the singer watching from the audience had people wondering if maybe she hadn’t enjoyed the show.

Pink and Aguilera have a now-squashed beef that dates back to working together on 2001’s “Lady Marmalade,” so fans couldn’t help but speculate. But Pink nipped the issue in the bud right away Sunday evening, embedding a tweet from Mark Sundstrom about she and Aguilera being “FRIENDS” and explaining that her facial expression was one of “awe”:

.@Pink and @Xtina deaded their beef last year and have been FRIENDS since, respecting each other's amazing talent as grown women. stop creating something out of nothing @TheShadyFacts

There you have it, folks. Awe.