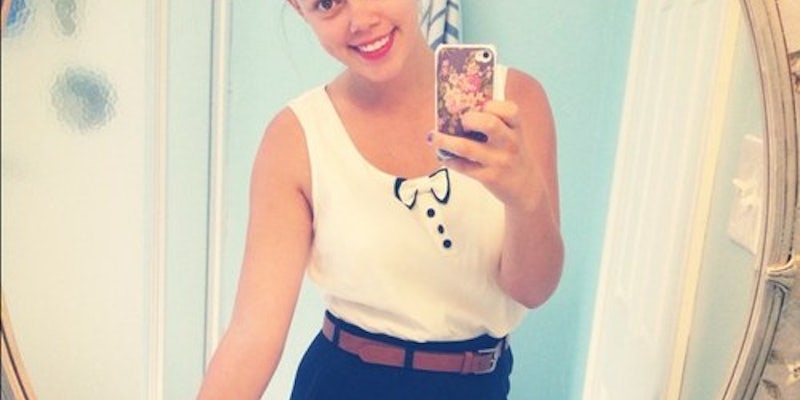 Within a week, “Photobomb Girl” has gone from an amusing aside to a minor Reddit celebrity.

When this photo was submitted to Reddit last week, the image’s most noticeable rubber-faced person immediately piqued interest in the community.

“So that photobomb girl is actually getting notorious at our local bar,” user TheHydroMule posted on Nov. 11, linking to an album full of pictures inadvertently featuring the mystery woman.

Six hours later, a second thread was posted that featured even more photographs.

Whyte immediately embraced the notoriety she was receiving.

“CASUALLY INTERNET FAMOUS ITS FINE ” she tweeted on Nov. 11.

Whyte even reached out to The Ellen Degeneres Show in an attempt to cash in on her budding fame.

“@TheEllenShow I had an article written about me, won a limo & now I’m almost an Internet meme can I please please please come on your show.”

On Nov. 12, user DrAstronaut requested that “Photobomb Girl” do an AMA. Within hours, she was taking questions on the site. Admittedly unfamiliar with the format, she graciously and thoroughly answered Redditors’ questions.

I’m going to get this question out of the way for everyone: you’re cute and obviously interesting, but are you single? (rhombus2210)

“Shucks, but no I’m not, amazing bf of three years hehee.”

With digital photography, it’s easy to see the photo right after it’s taken. After people notice you (in the photo,) do they usually get mad? What’s your most memorable experience with angry people (after you photobomb them)? (LoweIQ)

“OK so either people hate my guts or love me. One time I was at a bar at school and this girl was like I recognize you… your the photobomb girl, Im like YA all happy but then she goes I HATE YOU. 10 minutes later a picture of her and all her friends was photobombed.”

Have you ever been photobombed? (WorkoutProblems)

Is there an art to the photobombing? Do you stalk a group of people and hope to photobomb them or just follow the camera guy and any random group works? (mightymdc)

“At school I was friends with the camera guy and on my birthday last year I was like you have to let me photobomb them all. SO he did and then now I just kinda see the camera and creep.”

Her tips for successful photobombing include being best friends with the photographer, having no shame, and visiting smaller clubs. She pointed to this photo as her favorite photobombing attempt for three reasons.

“1 I know nobody in this picture. 2 its against a background in a secluded area for pictures. 3 they didnt notice.”

If your nightspot of choice is anywhere in the Barrie area, make sure you glance behind you before a picture is snapped. If you don’t, there is a very good chance that your memento of the evening could include a “Kelsey.”