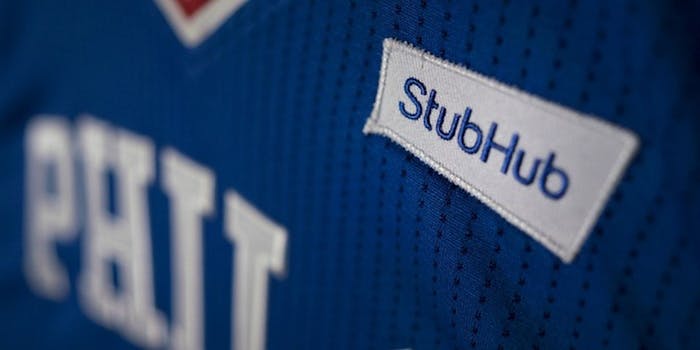 Fans also will have the ability to be walking billboards.

While fans of international professional soccer are used to seeing their favorite teams decked out in jerseys that display the names of presumably high-paying sponsors—and not the team’s own nickname or the city from which it hails—that trend hadn’t made it to the U.S. major pro sports market.

Until Monday, that is, when the NBA’s 76ers announced that they had agreed to a jersey sponsorship deal with StubHub beginning in the 2017-18 season that will include a 2 1/2-inch by 2 1/2-inch patch featuring StubHub’s new logo on the front left of Philadelphia’s game jerseys.

In the past, the NFL has sold advertising space on its team’s training camp jerseys but never for game jerseys. But the NBA Board of Governors approved the sale of game jersey sponsorships last month as part of a three-year pilot program.

“First off, hats off to [NBA Commissioner] Adam Silver,” Sixers CEO Scott O’Neil told USA Today. “He’s a commissioner who will take opportunities and will make the right decision and sometimes the tough decision and he continues to lead through policy. He gives teams the opportunity to drive our business.”

Not surprisingly, all the jerseys sold to fans at Sixers home games also will feature the patch, meaning patrons will pay to be walking billboards for the resale ticket-selling website.

According to USA Today, the three-year deal is worth $5 million per year, but the NBA hopes to make a total of $150 million each season of the pilot program.

“Jersey sponsorships provide deeper engagement with partners looking to build a unique association with our teams and the additional investment will help grow the game in exciting new ways,” Silver said in a statement last month. “We’re always thinking about innovative ways the NBA can remain competitive in a global marketplace, and we are excited to see the results of this three-year trial.”