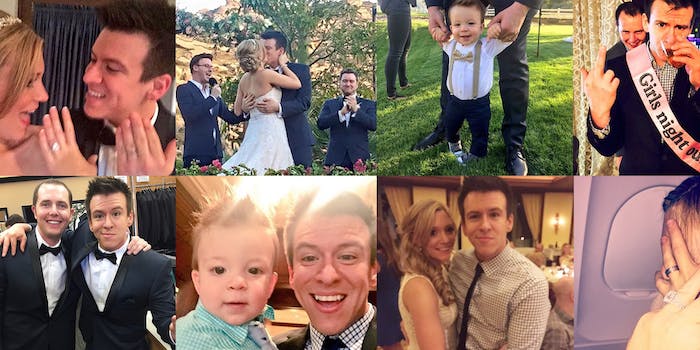 Throw some rice and press record.

It was a match made in YouTube heaven when Phil DeFranco and Lindsay Doty married this weekend in California with their friends, family, and fellow YouTube celebs cheering them on.

Let's be real though, this is the best photo from the entire wedding #DeFrancoWedding

The event was ripe with YouTube celebs. Michael Buckley officiated the ceremony, and Jess Lizama and Meghan Tonjes were bridesmaids. Other YouTubers in attendance included GloZella, Shay Carl, and AlphaCat.

Doty, who is a travel vlogger, wore a dress she found when she was featured as the “YouTube Bride” on a recent episode of TLC’s Say Yes to the Dress.

In true YouTube fashion, the wedding was amply captured on social media. Especially by guest GloZella, who even brings us a peek at the first dance.