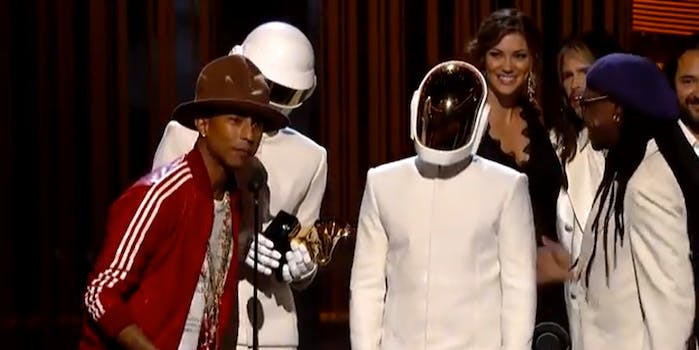 Pharrell Williams upstaged at Grammys by his hat

Only you can prevent forest fires … and fashion faux pas.

Pharrell Williams is a man of many hats. Sure, he’s a rapper, a producer, a fashion designer, a singer-songwriter, etc. But he also owns a surprising number of actual hats.

The one he wore to the Grammy Awards on Sunday night was wacky enough to start a meme of its own. The Canadian Mountie-styled cap inspired comparisons to Smokey the Bear and the Arby’s restaurant logo.

@Pharrell that hat tho !! #GRAMMYs pic.twitter.com/U5RjojSWVl

Thanks @Pharrell for a memorable #GRAMMYs night. Only you can prevent wildfires. https://t.co/o0OQ2rH4FQ @smokey_hat pic.twitter.com/HWTqbnuEU6

Pharrell’s hat is the Canadian version of the Sorting Hat from Harry Potter pic.twitter.com/xAN09ypEOQ

Pharrell may have taken home a Grammy for Best Pop Group with Daft Punk, but two novelty accounts and countless headlines later, it seems that his hat had a bigger night.