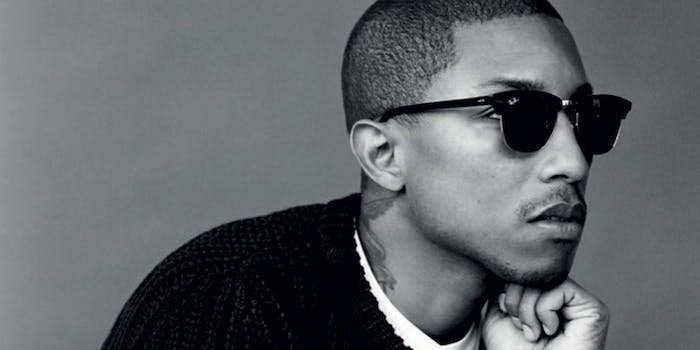 With quotes from Bill Nye, Gandhi, Frank Carpara and countless others, Pharrell's Twitter feed will leave you inspired.

Pharrell has been making somewhat of a “comeback.” Comeback is quoted there because it’s hard to really say a guy who produced tracks for arguably the two hottest acts of last year (Kendrick Lamar and Frank Ocean) is on a “comeback,” but nevertheless, here we are. It’s probably because his voice has found itself soundtracking the #songofsummer and he’s got trendy 23-year-olds in Brooklyn putting “Get Lucky” on when they, well, want to get lucky.

Pharrell is often painted by the press as a smart, inquisitive, and insightful guy. In a recent New York magazine profile, he shows that one of the main reasons he’s such a fine producer and musician is because he understands people and how they respond to certain things, whether its artwork or music or fashion or whatever. “It’s the way of a person that’s their personality,” he says at one point. “It’s not that he’s a ‘happy’ person—there are a lot of happy people—but his way of being happy, his way of wearing a shirt, his way of speaking to her; that’s what makes her love him.”

That’s pretty sweet, right? And what seems to be so great about this dude is that it’s not coming from a pretentious or overtly precious place. Everything he says is genuine and earnest, and because he is so freaking cool, it doesn’t even seem corny.

You know how when you go over to your grandma’s house and in her bathroom is one of those tear-a-way self-help calendars with the inspirational quotes about daily life, typically by someone whose name you recognize as important but can’t actually remember why they are important (unless it’s like George Washington or something)? Pharrell’s Twitter account is pretty much just like one of those.

Don’t worry about people stealing your ideas. If your ideas are any good, you’ll have to ram them down people’s throats. – Howard Aiken

I don’t know the key to success, but the key to failure is trying to please everybody. – Bill Cosby

Freedom is not worth having if it does not include the freedom to make mistakes. – Gandhi

Everyone you will ever meet knows something you don’t. – Bill Nye

The chief enemy of creativity is “good” sense. – Pablo Picasso

Out of suffering have emerged the strongest souls; the most massive characters are seared with scars. – Khalil Gibran