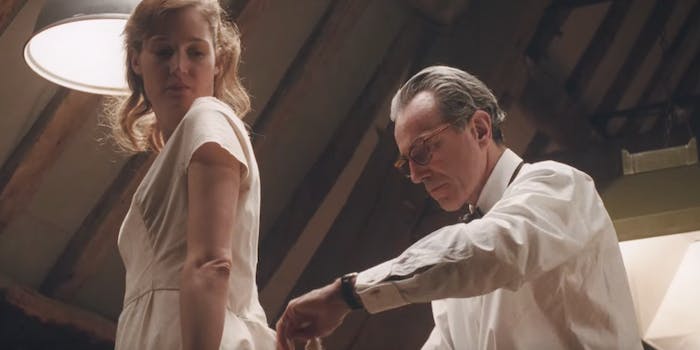 Following reports that the movie Paul Thomas Anderson and Daniel Day-Lewis were quietly filming might be Day-Lewis’ last, the trailer for Phantom Thread is finally here.

It’s a little anticlimactic after all the speculation. The two-minute clip is a moody, muted first look at Day-Lewis as Reynolds Woodcock, a celebrated dressmaker in 1950s London. He appears to be a happily single bachelor until he falls for a headstrong young woman named Alma (Vicky Krieps), who according to the A.V. Club “becomes his lover and muse, eventually driving him to restrained, British torment as she flirts her way into high society and even starts having her own ideas about what sort of clothes she’d like to wear.”

In other words: dressmaker makes dress for girl, falls in love, continues making dresses for girl, is shook when girl starts to have opinions. It’s a tale as old as time, but considering Anderson’s last movie was Inherent Vice, it seems like a departure to a much smaller, more character-focused world.

Radiohead‘s Jonny Greenwood reportedly scored the movie for Anderson, their fourth collaboration after There Will Be Blood, The Master, and Inherent Vice.

And fun fact: Day-Lewis apparently loved making dresses so much while preparing for the role that he plans to continue the hobby in his regular life.