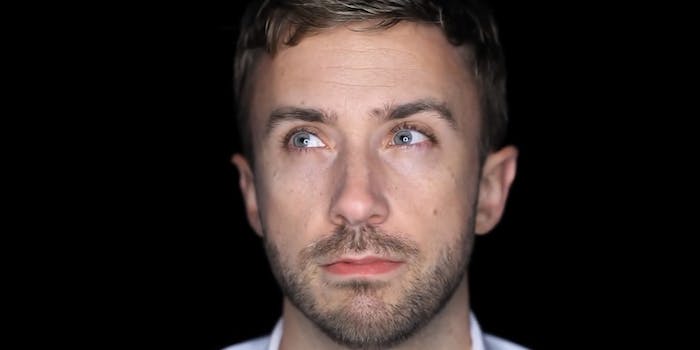 'YouTube to record deal' is the new 'blog to book deal.'

Peter Hollens is the newest YouTuber to sign a major label deal, inking an agreement with Sony Music Masterworks to release his debut solo album. Hollens shot to Internet fame as an a cappella singer who creates all the layered vocals on his videos by himself. He boasts over 750,000 subscribers and 100 million views on his work, which includes his most recent masterpiece, a Wicked medley with fellow YouTube singer Nick Pitera.

“Peter Hollens is an exciting new vocalist reaching a new audience through digital media. His ideas are fresh and his creative imagination is fearless. We at Masterworks are delighted to be with him on the next phase of his musical journey,” said Chuck Mitchell, Senior Vice President, Sony Music Masterworks U.S., in a press release.

Hollens’ repertoire spans from musicals to nerd themes to straight up pop music covers, all with an a cappella twist. He was featured on NBC’s The Sing Off in 2010 with his a cappella group On The Rocks, which he co-founded in 1999 at the University of Oregon. He’s collaborated with some of YouTube’s biggest stars in his time on the service, as well as with mainstream musicians like Jason Mraz and Hunter Hayes.

Labels have payed increasing attention to the YouTube and Vine spaces when signing new artists of late. Teen YouTuber Troye Sivan is set to release his debut album Trxye August 15th and Viner Shawn Mendes hit Number 1 on the iTunes charts in 37 minutes with his first album, The Shawn Mendez EP.

Hollens’ yet united debut album will be released on the Portrait Records imprint October 28.