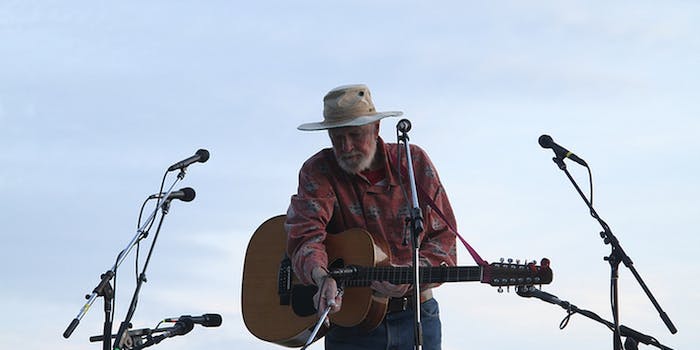 “I have sung in hobo jungles, and I have sung for the Rockefellers, and I am proud that I have never refused to sing for anybody.”

Folk singer and activist Pete Seeger passed away yesterday at New York Presbyterian Hospital at the age of 94, apparently of natural causes. He leaves behind 70 years of musical history. With that legacy, he not only made music that influenced generations to come, but essentially helped build the foundation for modern folk music and political activism.

Seeger is perhaps best known for “If I Had a Hammer,” or his cover of Lead Belly’s “Goodnight Irene” with the Weavers, but his roots went even deeper than folk music. He was a true activist, traveling the world to sing for migrant workers and union meetings. He was a member of the Communist Party, something he speaks about in this excellent Colbert Report interview from 2012. When called to testify before the House Un-American Activities Committee about his Communist Party involvement in the ’50s, he told the committee:

“I have sung in hobo jungles, and I have sung for the Rockefellers, and I am proud that I have never refused to sing for anybody.”

He also joined up with the Occupy Wall Street movement in Oct. 2011, with fellow folk legend Arlo Guthrie. This video is notable not just because everyone has their cellphones out to capture Pete Seeger, but because it bridges several political movements he was involved in. He transcended any one era of protest.

He truly was a man of the people and for the people. You don’t see that many musicians who remain true to their vision for that long. He just wanted everyone to sing along.

With that in mind, here’s a Spotify playlist collecting some of his best songs.