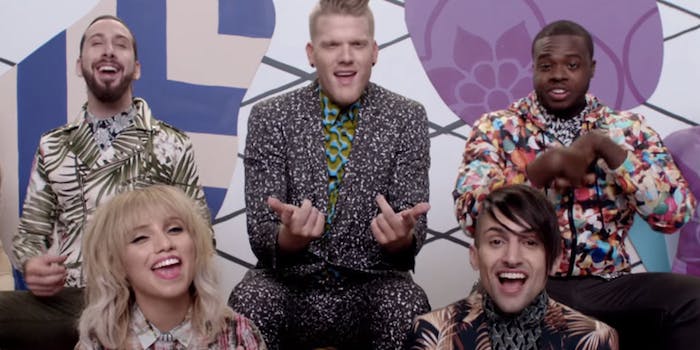 Pentatonix beats out Demi Lovato for No. 1 spot on Billboard album charts

#TeamInternet is taking over the Billboard charts.

Pentatonix made its mark digitally, but recently the group secured its first No. 1 album on the Billboard charts by winning out in pure album sales over competitors, not in digital streaming.

The YouTube a cappella darlings just barely beat out established act Demi Lovato, who had considerable radio play and promotion leading up to her album release. Lovato sold relatively the same number of units, 98,000, but Pentatonix edged her out in album sales.

Billboard renovated its charts in 2014 to include on-demand and streaming metrics in addition to sales numbers, but Pentatonix didn’t need a digital push to win, selling 11,000 more units than Lovato, who was more bolstered by streaming.

The self-titled album is the group’s fifth Top 10 showing on the charts, according to Billboard. The group previously charted with That’s Christmas to Me, PTX: Vol. III, PTX: Vol. II, PTXMAS, and PTX: Volume 1. Pentatonix is the group’s first all-originals effort, with only one reimagined song in conjunction with Jason Derulo.

The group, their fans, and their famous friends have been celebrating the chart placement on social media.

HISTORY HAS BEEN MADE!!! https://t.co/oqBLJncFmB

OH MY GOD! They did it! Pentatonix made history and debuted at No. 1 on the Billboard 200 by a few hundred albums. 😲 pic.twitter.com/EPrbTjQM7y

HISTORY HAS BEEN MADE!!! https://t.co/oqBLJncFmB

They aren’t the only YouTubers who’ve gained traction in mainstream music lately. Troye Sivan‘s most recent EP Wild hit No. 5 on the charts, and a full-length is due in December. With other digital stars like Shawn Mendes dominating pop radio, it’s not unthinkable for an all-YouTube and Vine Top 10 in the future. And they don’t even need streaming services to do it.