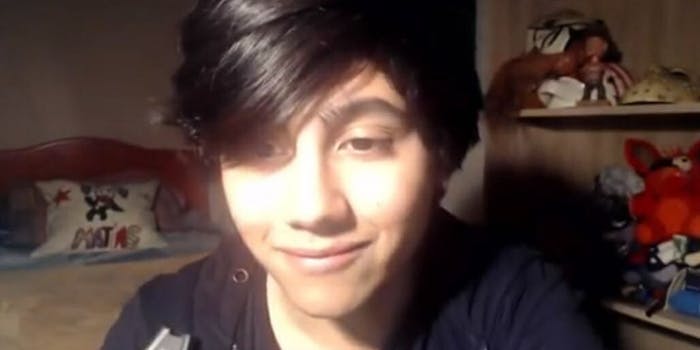 These videos are sickening.

A YouTube channel run by a teenager from Chile has reportedly filmed videos of himself abusing his cat, and despite a massive online outcry, his channel is still active on the platform, apparently run by a 15-year-old boy from Chile whose name is Matías Vera Oyarzún, reportedly uploaded a now-deleted video of him kicking, stomping, and paddling a cat.

Most of his channel is filled with videos of stuffed animals, strange animation, or of him playing video games. But last May, he posted a five-second video titled “Mi gatito Jason de bebé” (“My kitten Jason as a baby”) which he filmed a kitten licking his paw.

In his latest video, the YouTuber revealed that Jason died from an accident at the end of 2018 and that he had adopted two new kittens. Though he only has about 35,000 subscribers—75 percent of which have subscribed since his latest video on Dec. 15— Peluchin Entertainment compelled nearly 4.6 million people to click on his latest vlog. He hasn’t uploaded a video since then, but he’s increasingly facing criticism for a now-deleted video that showed him abusing his cat.

In that disturbing video, a person with a blurred-out face who is thought to be Oyarzún, continuously drops his cat onto the hardwood floor before kicking it across the room and stomping on its back. As the cat tries to crawl under a couch for safety, the person yanks the cat by its tail, continues to kick it, and then beats it with a paddle. The abuse is filmed for 2 minutes and 30 seconds.

YouTube news channel InformOverload reported that another video exists of Peluchin shoving a cat into a toilet bowl filled with excrement. His videos apparently have been demonetized, but as of this writing, his channel is still active.

According to La Vanguardia, a Spanish newspaper, Chilean authorities have opened an investigation into Peluchin.

“We informed the prosecutor’s office about this background, which together ordered certain procedures and after an investigative process such as the registration of witnesses, we were able to establish the identity of the child, his parents, and how the events occurred,” said Mauricio Negrete, the head of the Punta Arenas PDI Criminal Investigation Brigade, via the newspaper and Google translate. “The cat died and we do not have a record of where his origin is at this minute. The current prosecutor instructed at this time not to take a statement to the minor.”

YouTube channel the Quartering reported the two adopted cats that were featured in Peluchin’s last video were taken from him by a concerned citizen.

The kittens from yesterdays video are safe and sound.

@TeamYouTube has yet to take this monsters channel down which has gained another 5,000 subs. pic.twitter.com/LBV8Lhwjiw

There’s also a Change.org petition beseeching YouTube to take action against Peluchin. As of this writing, nearly 12,000 people have signed it.

YouTube is aware of the channel and said twice in the past month that it had deleted his abusive video.

Appreciate the report. It looks like the flagged content where the user was inflicting pain to their cats has been taken down by our team. Also, you can always report a channel if you believe it violates our Community Guidelines. Here's how: https://t.co/3VlMekV8aM

Sorry for the confusion. The video in which the user abused an animal has already been taken down by our Policy team. If you feel that the channel is still violating our Community Guidelines, you can report it here: https://t.co/TXbCTM0NPP. Our team will take a look.

But as for deleting the entire channel, that hasn’t happened yet. YouTube did not immediately respond to a Daily Dot request for comment on Wednesday morning.

Update 3:25pm CT: In an email response, YouTube pointed the Daily Dot to its violence policies, one of which states, “Violent content that is not accepted includes inflicting unnecessary suffering or harm to animals as well as encouraging or coercing animals to fight.” YouTube also has a three-strikes policy for someone who violates its guidelines, and if a YouTuber receives three strikes in a 90-day span, that channel would be terminated for good.

A YouTube spokesperson declined to say whether Peluchin Entertainment had received any strikes.