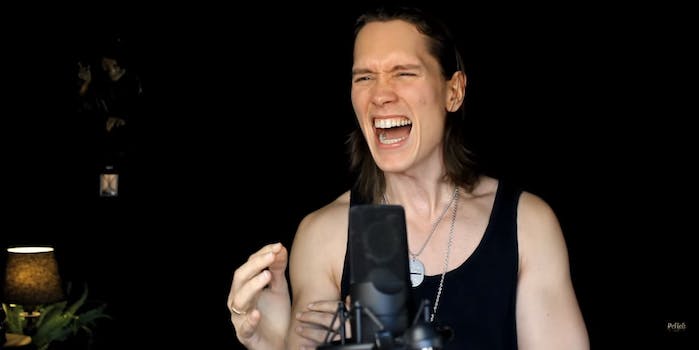 The coastal town of Sandefjord boasts Norway’s largest preserved Viking ship, a historic whaling trade, and is a reliable voting base for the conservative party. It also harbors the country’s biggest YouTube star, Per Fredrik Asly.

In almost every video, the long-haired, crystal-blue-eyed musician appears on-screen, wearing a black tank top with the occasional black leather jacket. There may be a greeting, but otherwise, Asly gets right to it.

Even if you don’t listen to metal, it’s hard not to be swept away by Asly’s self-produced tracks. Each song features thrashing guitars, intense drums, piano, and Asly’s versatile voice. “It’s not just guitar and singing,” Asly tells the Daily Dot.

While many cover artists just grab a guitar and sing acoustic versions of songs, Asly considers every aspect. “I play drums, guitar, bass, and piano. There’s mixing and producing,” he says. “Luckily I have a producer to help me out.”

Before his success as PelleK, Asly only attracted a few thousand subscribers with his original channel. That was back in May 2007, before he says he had any idea the platform could become his bread and butter. “People didn’t make music videos just for YouTube,” he says about the early days. “They made music videos for MTV.”

Being an early adopter to the budding network proved difficult. “I started making videos and no one really gave a shit because they were pretty average,” Asly says.

He also auditioned to front metal band DragonForce via online video submission. Despite his audition video receiving the most amount of views, becoming a DragonForce member wasn’t in the cards. Becoming a member of U.K. outfit Damnation Angels, however, was. “Before I realized how big YouTube could be, I did what everyone did in the ‘70s and ‘80s: toured and recorded a lot,” he says.

But YouTube left an impression on Asly, and after a few years of routine rock band workloads with Damnation Angels, he veered back online to focus on solo material. With a lack of views and subscribers however, Asly realized that not only was he a digital nobody, but that more problematic, he kind of sucked.

“After trying [YouTube] for maybe a year, I decided instead of focusing on getting famous, I needed to focus on getting good,” he says.

He read about journalist Malcolm Gladwell’s theory of needing 10,000 hours of practice in order to master a craft. Asly took a break from YouTube to do just that, singing for up to 10 hours every day. “After around two years, I could sing higher and lower than people I look up to in the metal community,” he says.

In honor of his return as a more learned vocalist, Asly created a fresh YouTube channel—his current one—and tried again. Showcasing his newly minted range of four octaves, the views and subscribers started rolling in after his maiden upload.

Asly enjoyed tens of thousands of subscribers. It still wasn’t enough to make a living, forcing Asly to take a day job and work on YouTube throughout the night. Eventually the company he worked for went bankrupt; even worse, Asly could not receive any financial help from Norway’s Labor and Welfare Administration.

“I couldn’t get anything because they said I made too much money from YouTube,” he says. “I started growing much faster at that point [because] I just worked with YouTube every day.”

That transition wasn’t easy. “Nowadays, [I do YouTube for] eight hours a day,” Asly says. “But before that, probably 12 or 16 hours a day just working with YouTube.”

Thank you @YouTube , for this golden 1 million subscribers-plaque. It's now hanging nicely above the computer screen in my studio

Asly say he puts forth so much effort in large part because of his fans—a unique mix of metal heads and anime lovers. “My fanbase is kind of divided into three,” Asly explains. “The fans who like my original music, people [who] want to hear me metalize stuff, and then there’s a group of fans who just want to hear me sing anime songs.”

Asly’s diverse followers speak to his passions, though. “The reason I started this is because I love anime, I love music, and I love metal,” he says.

YouTube is known for giving users the freedom and ability to engage and interact with fans, which Asly takes advantage of. When choosing songs to cover, the comments sections of Asly’s videos are the first place he looks. “My viewers or fans—call them what you want—just really help shape what I do and what I am,” Asly says. For him, even the “haters” are valuable: “If I get negative comments, I take it seriously and try to learn from it, and I think because I’ve done that so much, I’ve learned so much and changed so much.”

Asly’s loyalties lie with his fans, and especially with his paying customers, who pledge to contribute dollars for videos via Patreon.

Even with all the opportunities that Asly has received because of YouTube, he always stays true to his roots. The singer performed on Norway’s Dancing With the Stars and also landed a lead role in upcoming movie Creators: The Past alongside William Shatner and Gerard Depardieu. But as busy as he was with filming, Asly remained steadfast to his channel.

“YouTube is always my main priority,” he says. “The only thing I demanded was that I needed to be able to work with YouTube at the same time.”

The metal singer released his newest album, A Marvelous Method of Reclusion, this week, and it’s a departure from what he usually does. “It’s not my typical YouTube music,” Asly says. For one thing, Asly poured a hefty chunk of his war chest into the project. “It’s very driven by high quality and expensive production,” he adds.

My new album isn't typical me. It's me, sharing an over-the-shoulder view of my walk down the path of reclusion with u. Take it or leave it

Asly says he went for deep and meaningful lyrics this time around, as opposed to the dragons and fantasy stories of his past work. As he explained to followers in a post on the album’s pre-order site:

I didn’t make [this album] because I wanted to make a million dollars from it. Then I would’ve left the metal genre years ago. … I made this because it really means something to me. The fact that you guys want to pay for it, tells me, this album means more to you as well, than just money.

Being an independent musician is difficult, he added, especially in the face of free streaming and downloading. But that doesn’t bother Asly too much: He’s spent almost 10 years cultivating active and loyal fans online.