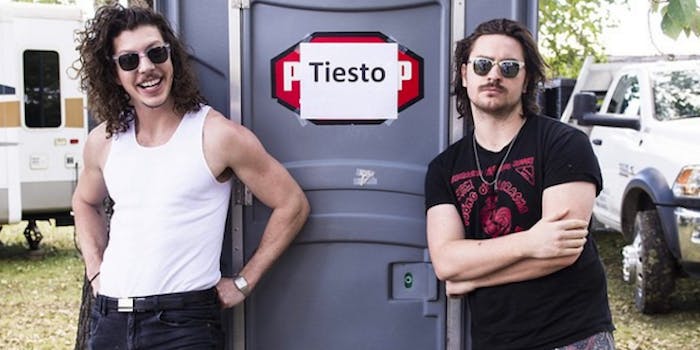 A fan of Australian electro-house duo Peking Duk was able to live his dream Wednesday by pulling a simple prank: he changed the “Family” section on the band’s Wikipedia page to list himself as their step-brother, then got backstage after the show by showing the page to security.

To the bouncer’s credit, he could tell something sketchy was going on. When the fan, Melbourne mental-health practitioner David Spargo, presented his phone as evidence, security took it to verify the story with the band.

The guys were so amused by Spargo’s prank that they invited him backstage to have some beers.

Having a beer with my step brothers. #notreally #melbourne #pekingduk

“I just had a lightbulb-above-the-head kind of moment and thought, ‘Yeah, I’ll give it a crack,’” Spargo told the Guardian. “No harm in trying, is there?”

The band even tweeted about the stunt the next day, with the perfect Anchorman quote for the occasion.

som1 edited our wiki 2 say he was our family. showed security, got in2 the green room and had a beer with the boys.. pic.twitter.com/DUZfki9hFS

Peking Duk’s “Background” section on Wikipedia has since been updated to read:

In December 2015, at a show in Melbourne, a fan accessed the backstage area by editing the band’s Wikipedia article page and inserting himself as a family member. Upon showing the article and his ID to the security guard, he was granted access to the band with whom he shared a beer. The band reacted positively to this scheme, stating “He explained to us his amazing tactic to get past security to hang with us and we immediately cracked him a beer. This dude is the definition of a legend.”

It’s safe to say that Peking Duk will probably get a few more fans trying this stunt. After all, it worked so well for Spargo.