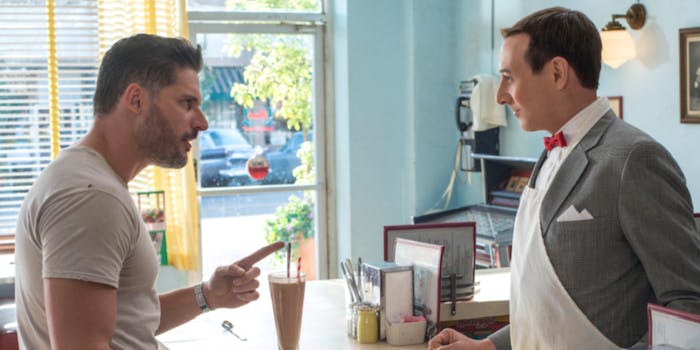 Last night at the Paramount Theatre in Austin, Texas, Judd Apatow stood onstage and explained how he knew he and Paul Reubens were meant to be together. When he was 16, Apatow took a photo of Reubens at Caroline’s Comedy Club in New York City. Decades later, he showed it to Reubens when he pitched the idea for a new Pee-wee Herman movie.

New York City is an essential part of Pee-wee’s Big Holiday, the follow-up to 1988’s Big Top Pee-wee, but the film took a while to get there. Reubens, who started out on TV with the influential Pee-wee’s Playhouse before transitioning the character to film, told the Los Angeles Times that there was “minimal interest” in a new film for years, until Apatow showed up with that photo.

Netflix eventually picked up the movie after other studios passed, with Apatow producing, Love star Paul Rust co-writing the script, and Inside Amy Schumer’s John Lee directing. In terms of plot, there isn’t much of one, which is perhaps deliberate: Pee-wee, still looking mostly the same as he did 30 years ago, is enjoying life in the wholesome, perma-’50s town of Fairville. As with Pee-wee’s Big Adventure, the film opens on his morning, but instead of his breakfast machine ushering in the day, the 2016 Rube Goldberg contraption encompasses a whole block.

The character of Pee-wee Herman has always been one of positivity; he’s pure, childlike, and timeless, and perhaps that’s why everyone he meets instantly connects with him. This happens with Joe Manganiello (Magic Mike, True Blood), who cruises into town on his motorcycle and urges Pee-wee to look outside Fairville and take a road trip. This sets the film in motion, as Pee-wee meets a cast of characters who further the plot along: two Amish guys, whom he introduces to the joys of deflating balloons; a group of black hairstylists in an RV; a trio of bank robbers (Arrested Development’s Alia Shawkat, Jessica Pohly, and Brooklyn Nine-Nine’s Stephanie Beatriz) who look like they were plucked from a John Waters movie.

Not every scene hits: When Pee-wee happens upon a farmer with a host of daughters who need to be married off, their weight and appearance seem to be the punchline. The girl gang, which serves as Pee-wee’s moral compass, could have been featured more; we don’t really get enough time with them. But this is a movie about men, specifically friendship between men. Manganiello, who plays himself, at first seems like an odd choice as Pee-wee’s insta-pal, but in this world, friendship can be forged over something as simple as a love of candy. He tells Pee-wee he likes him because he’s “normal.” Manganiello is playing with his hunky alpha male persona—via some more-than-friendly moments between him and Pee-wee—and it feels like one of the most subversive threads in the movie.

In the ’80s, Pee-wee Herman was a counterculture figure, a subversive answer to ’50s children’s programming. In 2016, when subversion is a click away, that’s harder to recapture, but Pee-wee’s Big Holiday isn’t necessarily trying for that. This is a film viewers will want to dip in and out of, which makes Netflix the perfect home for it. And at a time when the streaming company is going hard on the revival front, with varying results, this one feels like it was meant to be.