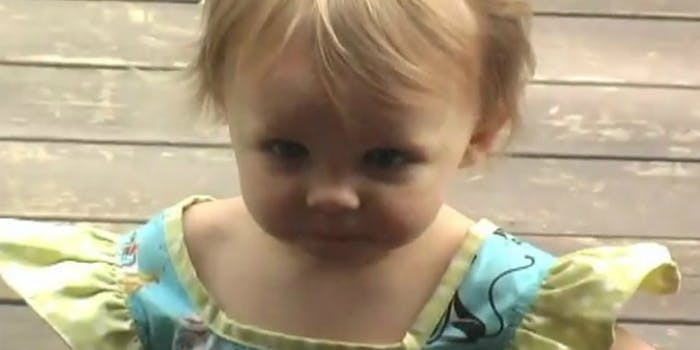 Here’s how Pearl, the foul-mouthed child landlord who made Will Ferrell cry, is doing today

The world has been waiting to find out: Did she kick that drinking problem?

If you were on the Internet in 2007, you probably remember Pearl, Will Ferrell‘s foul-mouthed landlord who was totally pissed that he was late on his monthly rent.

Sure, Pearl was just a 20-month old girl, but man, her words could cut you deep. Remember this Funny or Die video? Surely some of you do, because it attracted 83 million views.

Luckily, Ferrell survived that run-in, and Pearl—the real life daughter of Adam McKay, Ferrell’s comedy partner and the director of The Big Short—is now eight years older. In an interview with Studio 360, McKay updated the world on Pearl’s adventures and whether she ever solved that drinking problem.

“It actually worked out perfectly,” McKay said. “She never really did anything else. She did one other video. It’s just a fun little thing. She’s the landlord.”

That’s not to say she didn’t have the chance. After the video went viral, Pearl was offered a role in a Jackie Chan movie and a photo spread in People magazine. Her parents declined all offers.

McKay was surprised by the landlord video’s popularity. He said they shot the film in about 20 minutes as he and Ferrell goofed around in Ferrell’s guest house. Because Pearl was going through a phase where she repeated everything that was said to her, the two thought it’d be funny to feed her those insulting, expletive-laden lines and make Ferrell’s character cry.

“[The video] just exploded,” McKay said. “My wife was so mad at me. She said beforehand, ‘Don’t you dare turn our daughter into a child star.’ I said, ‘Honey, it’s going to get, like, a million hits. No one cares.'”

But the combination of YouTube‘s nascent power and Ferrell’s stardom—plus the utter hilarity of the video itself—turned the video into a hit, one of the Internet’s first big ones. Luckily, Pearl seems like a normal 10-year-old these days.

“She does own a Corvette and dates an Armenian guy who’s twice her age,” McKay said.