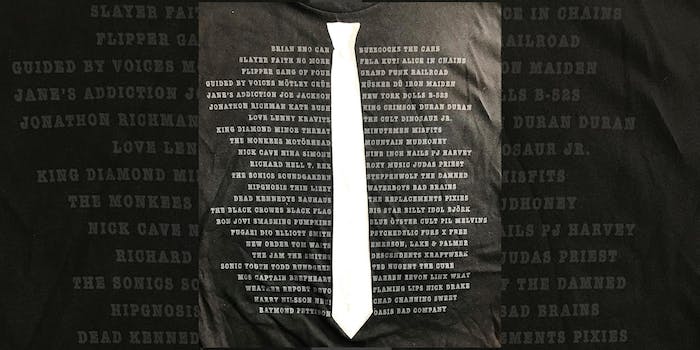 Consider this your new playlist.

Every year when musical acts are inducted into the Rock & Roll Hall of Fame, there are conversations about which essential acts are missing. Pearl Jam bassist Jeff Ament put it on a shirt.

During Friday’s induction ceremony, Ament wore a shirt that listed all the bands that were never inducted. It serves as a public nod to the missing (how has Nina Simone never been inducted?), and also a guide to bands you should definitely go listen to right now.

In the band’s acceptance speech, Ament further touched on the bands that influenced them: “It’s an honor in to be part of a club that includes so many of our heroes—Neil, the Clash, Zeppelin, the Stooges, Cheap Trick—but the fact is that we were affected and infected by bands that aren’t here. So many important bands that made us want to pick up our guitars and write songs. Roxy Music, The Jam, Devo, X, Black Flag, Jane’s Addiction.”