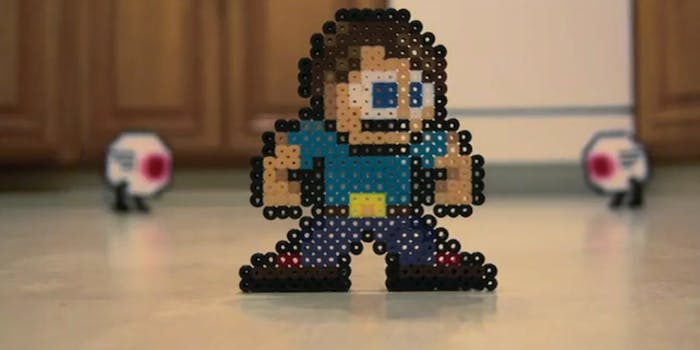 If you wondered what would happen if a video game character charged into the real world, you’ll love this. Mixing animation and live-action elements, “PCKTKNFE” envisions if a MegaMan sprite conquered your house and ruined your refrigerator.

The five-minute video was made by notable YouTube creators James Dunhour and Robert Kinsella and took six months to create.

“It is our homage to many of the nerdy things that James and I share a love for,” wrote Kinsella as part of the video’s description. Since posting on April 10, the stop-motion short has racked up nearly 30,000 views.

Sure, it’s kind of nerdy, but it’s really fun to watch. Hungry from running too much and dodging obstacles, the sprite bolts out of the television and into Dunhour’s house.

And the adventures it goes on! The sprite survived a plunge into a pond, falling knives, and a raucous dog. You’ll have to watch the very end for a surprise appearance by other sprites, too. The sprite (and the guys) even gained some fans in the comments section.

“I don’t always comment on YouTube videos, but when I do, it’s to say that﻿ this is AWESOME!,” wrote macshune.

“Fantastic concept, brilliant work, slick music!” added schrammbycakes. “ Awesome throwback nostalgia made possible only by modern technology. All I want to do now is go to the craft store for some﻿ beads and make some sprites of my own.”