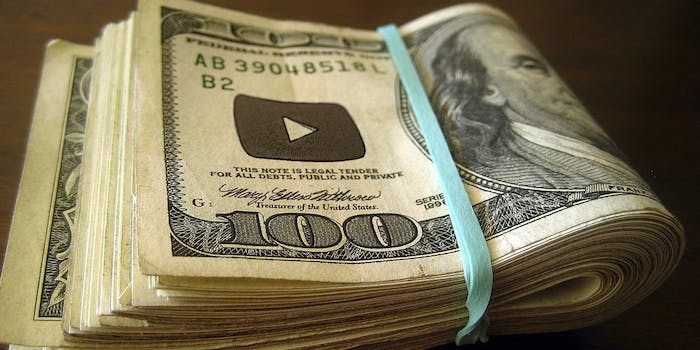 New startup offers payday loans to YouTubers—but at what cost?

Although digital ad spending is projected to surpass television spending in 2016, and YouTube has seen upward trends in advertiser spending year after year, the bottom line for creators is that payouts are not as fast or plentiful as they might wish. One company thinks it has a solution—but at what cost?

Some background: When an ad runs before a vlogger’s most recent video, they earn revenue for that display, but the gap between earning that money and getting a check to support themselves can leave a creator on unstable ground. That’s where Payability comes in.

“‘Why does it take 30 milliseconds to deliver an ad, but 30 days to get paid for an ad?’ That’s the question we set out to solve,” Payability CEO Keith Smith told the Daily Dot. Founded two years ago, but not fully launched until June, the company came from the minds of former ad tech executives who were looking for another way to help pay app developers.

Payability links up to a YouTuber’s ads dashboard, generating payments based on expected ad revenue that YouTube provides in a real-time estimate, but can fluctuate between when an ad is served and when actual payment is made. Payability markets its loan rates as as low as 1.9 percent of the income, which Payability uses to finance the operation.

But does the average YouTuber need a payment service to get their income quickly? In the app developer space, Payability says it works with clients who are regularly earning more than $10,000 per month in transactions, while YouTubers can vary along the scale depending on video output and trends. However, Payability is aiming to reach out to YouTubers who might want their capital expedited for expansions.

“If you ask people if they want to get paid faster just about everybody will say yes,” said Smith. “But the question is then, what I am going to do with that money, and what will it cost me to get that money faster? YouTubers have fallen in two different camps. Some want the capital to grow and expand, while some think of it as a regular paycheck.”

The creator community is not reacting warmly to the presence of Payability, at least not in public. (Payability declined to release the number of YouTubers it has participating, or the names of any YouTubers using its service.) Hank Green, who runs VidCon and several successful YouTube channels, tweeted about being approached by the service, calling it a “payday loan” and reacting negatively.

Oh my god…I just got a email service for a payday loan service specifically for YouTubers. Excuse me while I die.

He’s far from the only YouTuber who sees Payability and companies like it as predatory payday loan services aimed at the creator community.

“It sounds like the kind of company you make if you assume your target client is naive and won’t notice that they’re better off without you,” Barrett Garese told the Daily Dot via email. Garese is CEO at the Horizon Factory, a company based on app building for digital content creators. “I’m not shocked that something like this exists—it’s a byproduct of the poor monetization of the present YouTube ecosystem—but what this says to me is that they assume YouTube creators to be easy targets, or generally unsavvy when it comes to business and basic accounting, and are willing to take advantage of either scenario to the creators’ detriment.”

Gaby Dunn, a former Daily Dot contributor, who is also one half of the YouTube channel Just Between Us, called the idea “evil and exploitative.”

“This seems like a bad idea and could get a lot of YouTubers into debt,” wrote Dunn, who recently wrote about the financial struggles of successful YouTubers for Fusion, via email. “Loans are precarious things and many YouTubers are young. They might not understand what they’re getting themselves into.”

While Payability doesn’t characterize itself as a loan in its marketing, it is essentially cashing a YouTuber’s paycheck for them in advance of an actual payout. In the case of negative adjustments (when projected ad payout doesn’t match actual delivery) Payability says it manages those adverse effects by limiting payout to 80 percent of projected revenue, leaving 20 percent to resolve after YouTube pays them the true amount.

“That way if there are adjustments that come along, we can allocate those against that reserve, and then when we get paid from the marketplace we release the rest of that reserve,” explained Smith.

Digital creators like Dunn and Garese are less concerned with finding fast ways to access cash for a cost, and instead with how to increase the overall bottom line.

“The best way to support creator sustainability is to raise their revenues,” said Garese, whose company is built to do just that. “For the vast majority of creators, the best pathway to doing so is to move beyond YouTube, and to have better control over their audiences and distribution channels. Creator sustainability isn’t built with predatory payday loans and finding more ways to shave another couple percentage points off of already low advertising revenues, but by supporting creators, increasing their revenues, and making it easier for them to deliver compelling content to their unique audiences.”

While Garese points out YouTube is not incentivized to make revenue changes in favor of the creator, Dunn noted that transparent and standardized pricing for deals would be helpful in empowering creators to maximize their finances.

“Or some oversight from an advocacy committee of YouTubers about pricing for ads and brand deals,” she added.

Until that time, options like Payability are available to YouTubers looking for fast cash, but even Smith admits that their product is not for everyone.