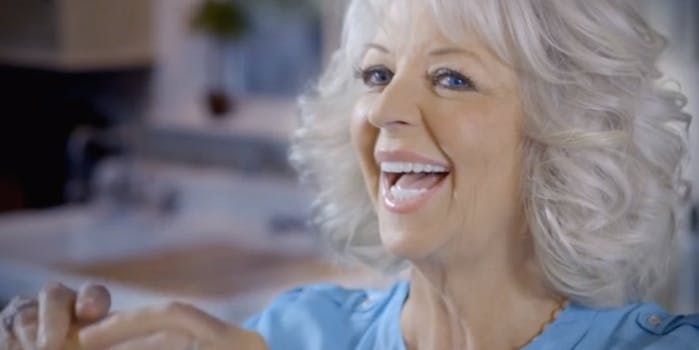 This promotional clip for Paula Deen’s new app is horrifying

Did you need Paula Deen slow-mo pouring milk in your life? Yes.

If you’re hoping for a peaceful night’s sleep, do not watch Paula Deen‘s latest YouTube video.

The cooking channel star is buying into the celebrity app trend made popular by Kim Kardashian with her own, Candy Crush-style puzzle app that involves cooking utensils. That’s no cause for alarm. The video she choose to promote the new venture with, however, is flat out terrifying.

Deen is no stranger to being a meme, or a high level of public scrutiny for her actions. For this app video, she definitely deserves all the memes and scrutiny the Internet will throw at her. It’s potentially a play off the already-demonic slowed-down Deen videos that do well on YouTube, but instead of slurring interviews and instructions, we just get Deen staring into the camera as she pours milk and smiles at eggs. The song alone will never leave your head.

The app is free for download in the iTunes store. If you win the game, you could get a chance to cook with Deen, but who would want to after that disturbing video?