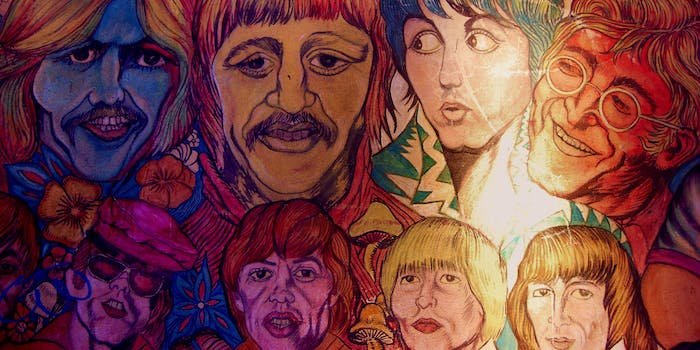 I mostly hear a spirited musician, optimistic about these next 20 years.

Warning: This article contains spoilers for the ending of Destiny.

It took a YouTube user rushing to beat Destiny and upload its end credits, but Thursday those of us without the soft touch and guiding hand to invest in the video game got to hear its Paul McCartney-composed theme song, “Fight for the Future.”

After 2:20 of the game’s score, McCartney’s anthem burrows in. It’s a bloated and ambitious gesture that aims for transcendence and doesn’t land far from the “Live and Let Die” tree. The words are guarded and contextual, “Some hope for the future / some wait for the call / to say that the days ahead will be the best of all.” And later: “We build bridges up to the sky.” And, in classic softie romantic Macca fashion (think the everyday optimism of “Ob-La-Di Ob-La-Da” for thematic scope), “we’ll be together / sharing the load / waiting in wonder as our lives unfold.”

Sure, it’s a Beatle singing about a science-fiction-based video game, but it’s also a Beatle aware that we’re hearing a Beatle 20 years north of middle age. There’s a little more rasp, a little more wear and tear than before. I mostly hear a spirited musician, optimistic about these next 20 years—ones he’ll use for “lighting undiscovered places.”

The thing was recorded at Abbey Road with the help of a 120-piece orchestra. McCartney teased its composition two years ago.

“I’m really excited to be working on writing music with @bungie, the studio that made Halo.” – Paul pic.twitter.com/lRxl8Jr8

The New York Times confirmed the project last month. “Fight for the Future” will eventually be released as a single, but for now, enjoy the bootleg.