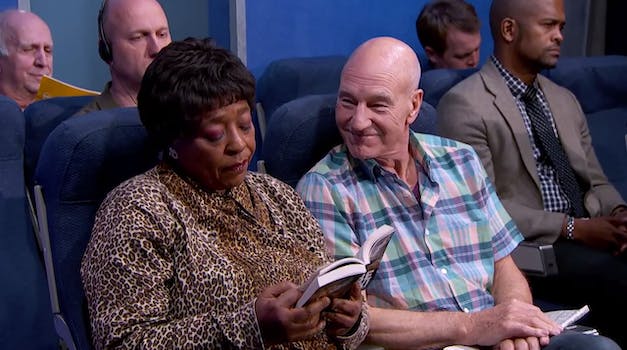 We've all seen this in real life.

Almost everything about air travel is terrible, but the worst part is usually being seated next to the passenger from hell.

After an Expedia poll revealed the characteristics of the worst kind of people who fly, Jimmy Kimmel wanted to show his audience what those traits looked like. Instead of listing them or acting them out himself, Kimmel brought on Sir Patrick Stewart to personify them.

It used to be impossible to imagine Stewart as that asshole sitting next to (or behind) us, but now we can see it. We can see it perfectly.

Naturally, Stewart delighted in playing the worst kinds of jerks, and while it was completely exaggerated, it suggested that Stewart had seen or sat near all of those people on an airplane before. Unfortunately, Stewart’s bit won’t make dealing with the real thing on our next flight any easier.