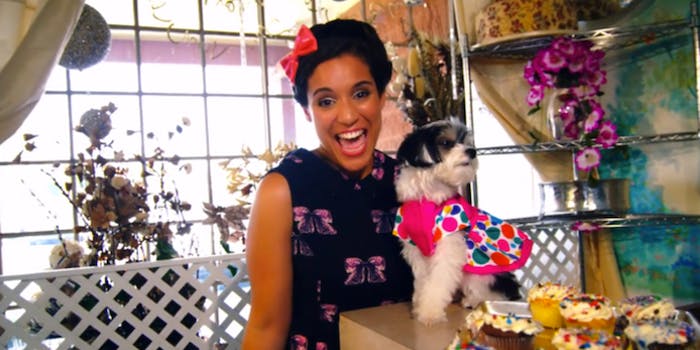 There’s a new Patrice Wilson video about cupcakes, and it’s kind of dark

Is Wilson attempting to be more wholesome?

It’s been pretty quiet on the Patrice Wilson front since the release of Alison Gold’s questionable video for “Shush Up.” Many people thought Wilson, known for producing purposely over-the-top videos that scream for hate-clicks, went too far with Gold’s video.

Perhaps Wilson knew this, because his latest pet project is Gina Naomi Baez’s “Cupcakes,” which costars Tinkerbelle the dog, and is all about cupcakes and summer and, well, it’s always hard to tell with a Patrice Wilson video. The chorus is basically, “Gimme one of those cupcakes,” and the video does nothing to address the epidemic of childhood obesity, though Baez does take a personal stand on body image.

As per usual, Wilson makes a cameo so he can rap a verse about cupcakes, explaining, “When I want to cry, I eat more cupcakes.” This video got real dark real quick.