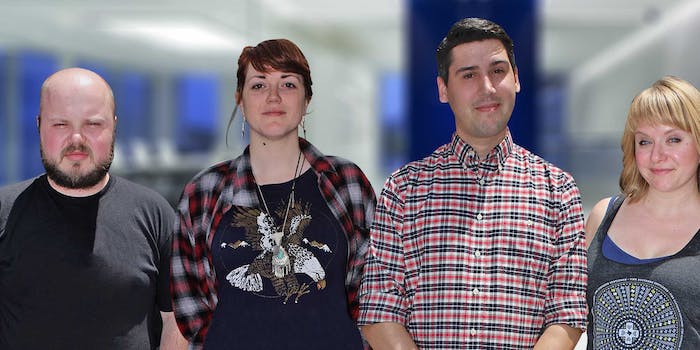 Patent trolls get their comeuppance in this crowdfunded comedy

Filmmaker Lex Lybrand is trolling the trolls with a movie called 'Trolls.'

The flaws and nuances of intellectual property law are hardly obvious source material for a comedy film, but so be it—Austin-based filmmaker Lex Lybrand has assembled a ragtag group of actors and crew to bring such a movie to life.

Titled Trolls, Lybrand’s script follows a fictitious tech startup that invents batteries that never lose their charge. As it’s obviously a world-changing, money-making technology, patent trolls crawl out of the woodwork to make life miserable for our characters, who find themselves in a situation where the only way to fight back is to similarly exploit intellectual property law to their own righteous advantage.

According to the Electronic Frontier Foundation, a patent troll is a person or company that “uses patents as legal weapons, instead of actually creating any new products or coming up with new ideas. Instead, trolls are in the business of litigation (or even just threatening litigation).” Put another way, a patent troll is an entity that buys up patents and is entirely in the business of suing others for even coming close to infringing on those properties.

It’s a topic that incenses a lot of innovators, but now it’s on the way to becoming a comedy. Lybrand and company seek to raise $20,000 on Indiegogo to bring this film to a screen near you. Here’s the pitch video:

Lybrand has been a filmmaker “forever,” he tells me on the front porch of the Daily Dot’s Austin office. “In second grade, I was literally running a closed-circuit television show for my school by myself. I animated lunch menus and was a tech director for three cameras.” His interest in the art only grew, and he now finds himself an experienced filmmaker eager to show the world what more he can do.

He first became aware of patent trolls when the topic repeatedly came up in podcasts he listened to. The comedian and podcaster Adam Carolla was one of the loudest voices here, using his platform to rail against a company called Personal Audio, which held two patents it claimed were the fundamental backbone to how podcasting works. If its claims were valid, it would be entitled to a huge legal payday from the vast number of people using a technology that didn’t “belong” to them.

“The first patent was for literal bullshit.”

Carolla fought back and countersued when Personal Audio dropped the case. Ultimately they settled and the company’s patents were invalidated, but this success story is a rarity—much more often, it’s the trolls that win.

Lybrand’s fictional universe allows for a scenario in which the oppressed battery technology company patents the very idea of patent trolling. This plot point is “playing loose with how the law works, but not that loose,” said Lybrand. The entrepreneurs troll the trolls, and this injects the comedy into a movie about a heady, complex topic.

“In 10 years, I want this movie to be like [non-fiction film about the car industry] Tucker was when I saw it in high school,” said Lybrand. “Your teacher puts it on and says, ‘Here’s how stupid this stuff used to be.'”

“One of my favorite jokes in the movie is like something out of National Treasure,” he added. “The first patent ever issued was for fertilizer, the idea being that the patent system was always a joke to the founding fathers. Our heroes do some digging and find some more clues—the first patent was for literal bullshit.”

You can contribute to Lybrand’s production budget by following this Indiegogo link.